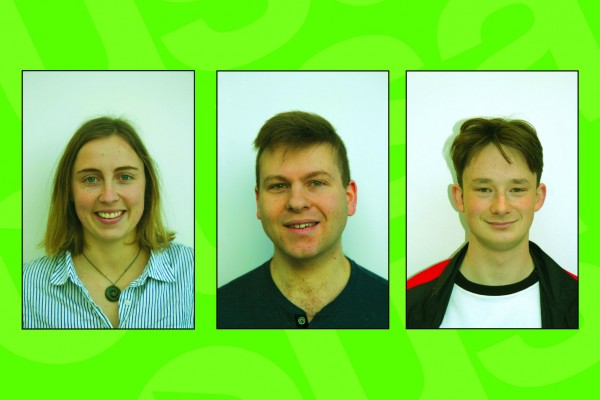 A Win for OUSA Insiders in the Exec By-Election Results

Georgia Mischefski-Gray is the new Admin VP, Benjamin McCook-Weir is the new Campaigns Officer and Matthew Schep is new Postgraduate Officer in a by-election Critic is calling a win for OUSA insiders. Hoping it’ll catch on. Probably won’t.

All the new Exec members are OUSA adjacent. Georgia was Campaigns Officer before she quit to run for Admin VP, while Ben was the Capping Show Director with extensive experience in OUSA, and Matt has run for Exec positions in three OUSA elections before this one.

Georgia took 65.83% (872) of the votes in the election that had the highest number of no confidence votes at 96. Dan Stride, who was on the OUSA Exec in the early 2010s, followed with 34.17% or 298 votes. Please enjoy attached photograph of Dan drinking orange juice in 2011 that we found on our Facebook page.

Georgia said she’s excited for “all the real interesting shit” about being Admin VP and, surprisingly, some of the stuff she mentioned was actually kinda interesting for OUSA standards like strengthening OUSA’s sustainability policy and keeping the Executive accountable for doing their work.

Matthew Schep won the Postgraduate role with 145 votes, which was unsurprising seeing as it was uncontested. He received 18 no confidence votes.

Matthew said his big goal is to “reach every postgrad office and department and connect with them to be really representative”. Matt said his Uni workload wouldn’t be a problem like it was for outgoing Postgraduate Officer Dermot Frengley, as he’s finished his Masters dissertation and is currently doing some coursework for interest.

Ben said that for the rest of the year he wants to bring the great existing work of students and the executive to the forefront, and ensure that this work is accessible to students through “better frontage and communication to students”. Particularly with LGBT+ initiatives and the local body elections campaign. In regards to his STV win, he said, “that’s how the cookie crumbles”. Not just because he benefitted from it, but because he genuinely believes it is the most representative model.

Adam Currie explained the STV voting system to Critic when asked what he thought of it. We know, but thanks. However, he did acknowledge that “it’s better to have [someone] everyone thinks is ok, than one person that only a minority like”. But he also pointed out that less than 5% of students vote, so “it’s all a bit theoretical to be honest”, which is a good point.

Adam was critical that OUSA had no “clear tikanga” around resignations and the rules around by-elections. He said “you’d never get these types of resignations from kaumātua/other leaders in Marae/Hapū - the whole OUSA model is a very Pākehā way of doing things.”

Adam was also concerned that, since Pou resigned there’s not a single normally elected Māori rep on the Exec to support Taylor-Rose as the Te Roopū Māori Tumuaki President. He said “it’s super important that we have people driving putting tikanga and Te Tiriti at the heart of OUSA, from simple Exec environment tikanga like opening and closing with karakia, to advocacy as a Te Tiriti ally - such as putting out a release to tautoko [about] what’s currently going on in Ihumātao.”

Although he didn’t win the Campaigns position, John McWatters still wants to help OUSA – with their information security. On Wednesday, he alerted Critic that OUSA’s election results could be prematurely viewed on their website. As a result, this was resolved and the results were officially announced later that day.

John said it is fair enough that OUSA is using a third party’s software for voting and publishing the results since designing software and web development is difficult and expensive.

But, “when it comes to the integrity of an election, all reasonable steps to control who has access to voting data should be taken, and in this case it seems this wasn’t done … Blaming a third party who may well be at fault is simply not good enough. Only the returning officer should be able to publish this information,” said John.

He suggested a review of OUSA data security conducted by one of the “talented students in Computer Science and related degrees” currently studying at Otago.

“I would personally love the opportunity to analyse the information security of OUSA elections.” Very wholesome, John.