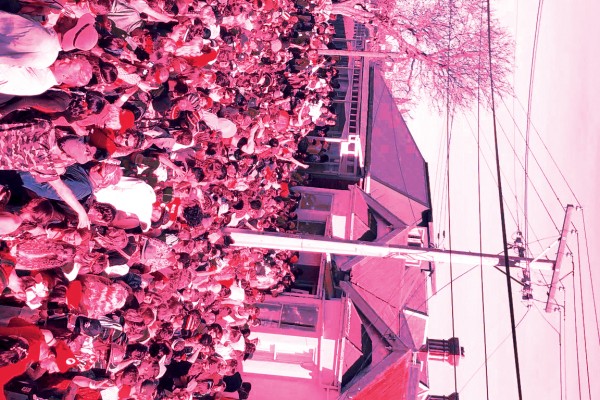 Out with the ag-old, in with the Agnew

The student organisers of the Agnew Street Party are trying to make this year’s party safer after last year’s got out of hand.

One of the organisers said the Proctor, Dave Scott, has been “an absolute legend” in helping them figure out how to make the now seemingly annual street party safer and more fun than last year. The student residents of Agnew Street initiated the meeting with the Proctor to make sure he wouldn’t shut down the party and get advice on how to make it safer.

One organiser said they lived on Agnew Street last year when the party was “hectic”, attended by over 2000 students. Police also arrested seven student-aged males for disorderly behaviour. The organiser said, “The police had to block the street off early. We couldn’t even leave our flat and we had a little barricade up to try and limit people coming into our property which didn’t work super well to be honest.” They appreciated Scott’s advice because “we wanted a little bit more control than we had last year”.

Proctor Dave Scott said he asked the organisers to consider banning glass and people on rooftops, providing non-alcoholic drinks and food, ensuring support for people who become unwell or unsafe, toilet facilities, limitations on advertising, set hours for the event, rubbish facilities, clean-up plans and a point of contact established for Noise Control.

In turn, Scott said “the Proctor’s office is able to give planning information to emergency services in order to help them coordinate their own staffing/patrol needs on the day, the DCC in terms of noise and rubbish, and for Campus Watch to be able to ensure adequate staff are in the vicinity”.

As a result, the students made the Facebook event private. “Within an hour the event reached 4000 people going so we decided to turn off people’s ability to invite other people; now it’s just those of us on the street who can invite others. This was our decision and not the Proctor’s. Obviously we know that people will just show up on the day because news travels fast through word of mouth but it still limits it a bit.”

They also opted for a ‘cans only (no glass)’ event, and hired Gravity Events to help with the DJs, security, fencing, port-a-loos and the next-day clean-up.

This stuff isn’t cheap, as Agnew Street isn’t supported by OUSA like Hyde Street. Instead, an organiser said they have to “fork out all the costs themselves and let’s be honest, we’re all broke uni students.” So, they’re asking students to donate to 12-3125-0565324-00 to fund a more fun and safe party that doesn’t break the bank and is still 100% resident-run.

Also, Agnew Street is the same weekend as the Dundas Street Bridge storming event. Just gonna leave that there.