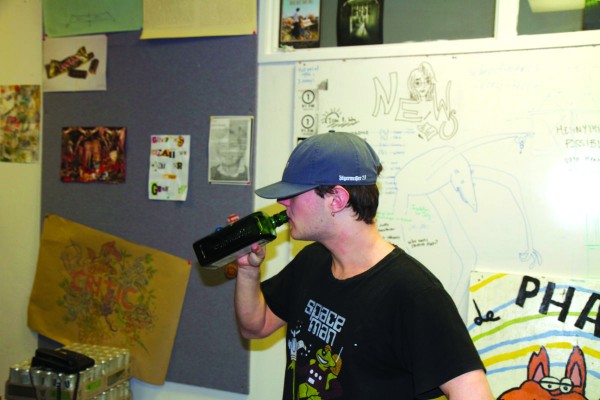 Editorial: Boomers Are Upset About Something

Buying drinks in a bar is like artificial insemination. It’ll cost more than your entire student loan and you’ll end up being disappointed.

Last week the media latched onto OUSA pointing out that buying alcohol in a bar costs too much. The ODT ran the inflammatory headline “Students call for cheaper alcohol,” which was republished by the New Zealand Herald and Radio New Zealand.

Stuff ran a long story ripping into OUSA, bringing on experts left, right and centre to discredit the idea, including Nicky Jackson, Director of Alcohol Healthwatch, who said that the idea would contribute “to significant death in our country". Fuck off Nicky.

OUSA’s proposal wasn’t to make all booze cheaper so people can get pissed more (honestly, Critic also supports this), what they said was that because people can’t afford to drink in bars, which are safe and regulated environments, people tend to buy cheap alcohol at liquor stores and get wasted on the street and at house parties, which are absolutely not safe and regulated environments.

Look, it’s not as though making bar prices lower is flooding the market with cheap alcohol. I can already go and get dirt cheap alcohol. It’s not going to taste nice, and there’s a good chance it’s going to be a goon, but at least I can still pay rent afterwards.

All lowering bar prices does is move people indoors to safe environments where if they pass out someone’s going to notice and take care of them and not leave them in the gutter. Providing a safe space for people to drink was the whole rationale behind OUSA buying Starters in the first place, and it’s good to see them still pushing the issue.

The boomers in the Uni and the DCC are a real part of the problem here. Both were instrumental in closing down some of the most iconic student bars back in yesteryear, with the Uni buying up a lot of them for prices no one else could compete with just to shut them down and turn them into study centres (shoutout my main boi, the Marsh Study Centre). The rationale was that closing down bars would end student drinking. Except of course it didn’t.

Honestly I don’t really care that everyone in the media jumped on what happened to be kind of a throw-away point by OUSA, taking up only a few minutes of their half-hour submission to the DCC. So the media ran divisive and misleading stories for clicks. What’s new? It’s what makes people read the media; it’s how they’re still alive.

We’ve just got to remember that because a bunch of boomers are pissed off at something, doesn’t mean it’s wrong.