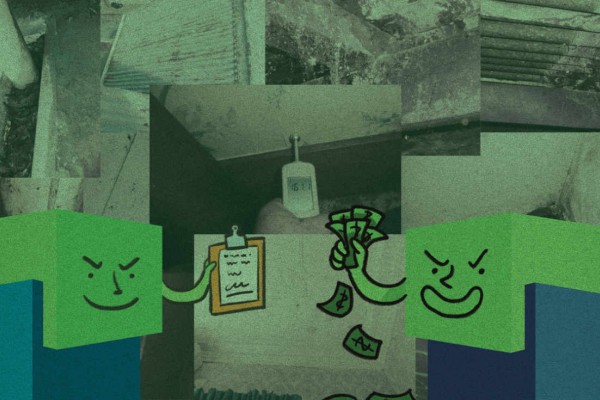 “At what point do you realise things are a total clusterfuck?”

Students have claimed Four Walls Property Management ignored tenant requests for maintenance in a flat at 61 Grange Street that was deemed “unfit to be occupied”.

Interim manager of Four Walls Rob Woodhouse described the company’s situation as a “clusterfuck” and OUSA Student Support said they’ve had an increasing number of students report issues with the company.

One student who currently lives at the 61 Grange Street flat said a part of the roof in their bathroom has been leaking since they moved in on January 13th, due to bad weather and heavy rain.

They say that to date, nothing has been done, despite emailing their landlord, Four Walls Property Management, to request repairs.

“They got someone to have a look at it, [they] literally walked in, looked and left. We haven't heard anything since then.” They complained of “problems getting fast responses from [the property manager]. Hell, even any response.”

It’s not the first time the flat has had issues with leaking.

In 2017, tenants of 61 Grange Street successfully took Four Walls Property Management to the Tenancy Tribunal over the poor condition of their flat. One tenant alleged there was “major structural damage to the roof at the time we moved in that we weren't told about. On one night there was massive rainfall and there were leaks all throughout the building in every room.”

Two of the flatmates had “major health issues that the flat and damp made even worse,” said the tenant.

The property manager at the time hired a plumber to check if the roof was leaking, and the tenants decided to go one step further and pay for an independent evaluator. The resultant Health and Safety Building Report Assessment by Dunedin House Inspections found that the roof, window frames, walls and carpet were in need of replacement, alongside cleaning of toxic mould and mildew in areas. The report said the property was “unfit to be occupied in its current condition”.

The Tenancy Tribunal ruled that the tenants should have their lease early and get compensation for the costs of the building report, costs of running dehumidifiers and a partial rent refund of $15 each per week for nine weeks in total. Despite seeking exemplary damages for the condition of the roof and subsequent leaks, they failed to have this recognised by the judge who was not convinced Four Walls “intentionally failed to maintain the roof”.

When Mack was asked if she had any knowledge of the 2017 Tenancy Tribunal ruling at 61 Grange she denied being aware of the issues.

“It’s actually a lovely wee house so I can’t see how this is correct,” she said. “But I wasn’t the owner in 2017 so I can’t comment regarding what happened before ownership. Currently, the house is in great nick.”

Critic reached out to Four Walls and learned that Mack is currently on sick leave and is now overseas. Rob Woodhouse was brought in as a contractor to run the business while she’s away.

He admitted that there had been a lack of contact with tenants, and described the situation as a “clusterfuck”.

“There has been a common theme that there has been a lack of communication with Kelly and her tenants of the three months of this year. From January and March, the wheels totally fell off ... It’s been a total clusterfuck,” he said.

When Critic brought up the allegations of other students who had complained of poor communication with Four Walls, Woodhouse remarked, “I'm not surprised to hear that, there has been a loss of contact when Kelly got sick. There were a lot of unanswered and unopened emails during the period when she was in hospital, it could well be one of those.”

He also believed that, while landlords were notified, there was no official notification from Four Walls to tenants of Kelly’s sickness or absence, with an auto-reply message set up when tenants contacted Kelly via email. None of the students Critic spoke to received notification of Kelly’s absence, and Critic was unable to confirm whether any notice was sent out. Woodhouse said she “consciously chose not to contact tenants directly while she has been away”.

Woodhouse also acknowledges that many 2018 tenants managed by Four Walls may have not have had their bonds refunded; he said it was “difficult for me to identify which ones these are because you can’t get a print out from Tenancy Services. It actually isn't as easy as you think, coming in blind.”

Sage Burke from OUSA Student Support, who advocates for students in tenancy cases, said they have seen an “increasing number of cases related to Four Walls Property” this year. “We are noticing Four Walls Property simply cutting off all contact or communication with the tenants,” said Sage. Under the Residential Tenancies Act, both parties to a tenancy agreement have obligations, he said, which “means that landlords and Property Managers have responsibilities they are required to meet - not just the tenants”.

Sage said tenancy and flatting issues make up roughly a quarter of the cases that Student Support encounter. Their advice for students is to make sure any communication or agreements are in writing, and to come and see OUSA Student Support as soon as possible if they encounter any issues. He also acknowledged that issues with property managers, flatmates or the house itself can cause undue stress, affecting a person’s mental and physical health, and encouraged students to look after themselves.