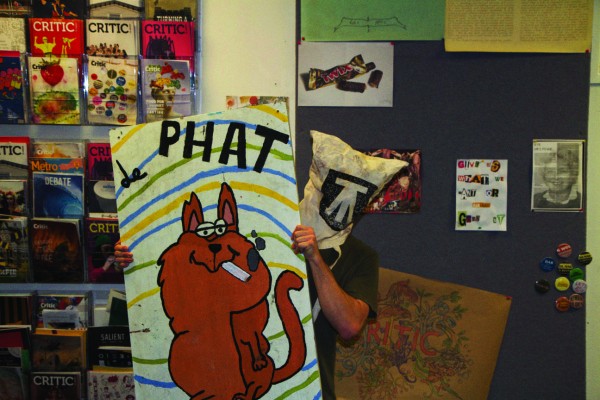 Any signs not claimed will become Critic office wall art

Early last week the stolen sign for The Birdcage flat was returned to their doorstep. One of the residents managed to contact a friend of the thief, who convinced them to return the sign. When The Birdcage residents contacted the suspected thief directly, they denied the allegations and told the flat mates they “don’t want your shitty sign”. The sign was just one of several flat signs stolen last month.

Dave Towers, landlord of The Birdcage, was very pleased to see the sign returned unharmed. He said “it’s great to see that while the sign was taken in ‘fun’, the guys saw the bigger picture and had the decency and respect to return the sign to their fellow students”.

The thieves apologised to the residents, and declined the cash reward offered by Towers, claiming that they “definitely don’t deserve a reward”.

Critic has seen communications between the people that knew the thieves and the Birdcage residents. It is unclear who specifically stole the sign, as the thief’s friends were very vague in their information, and avoided putting blame on anyone in specific.

The friends of the thieves also claimed that the sign was stolen on a drunken night out, but the residents of The Birdcage told Critic that tools would have been required to remove the sign.

Other stolen signs are still missing, including the sign for The Hoe-tel. Critic has also been alerted that The Bombay Sapphire flat sign from 39 Howe Street was stolen. The culprits behind The Birdcage theft told Critic that they are not responsible for any other sign thefts.

The flat sign for ‘Le Phat Cat’ was dropped at Leith Liquorland for Critic to collect, but we don’t know where this flat is. If you’re the sign’s lucky owner, hit us up at critic@critic.co.nz, or don’t - it looks pretty nice in our office.