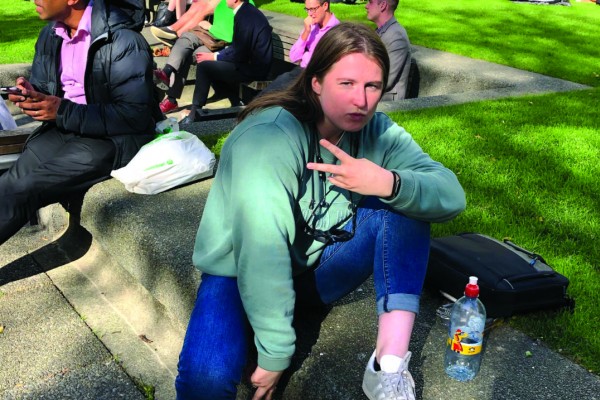 Caity Frickin B from NZUS-frickin-A

“Everyone loves me, I can’t help it. You can put that in a quote if you want.” - Caity B

You’re right in wondering what the heck NZUSA is. NZUSA is the New Zealand Union for Students Associations (the daddy of OUSA, if you will). The idea is that there are issues that all campuses share, so the national team based in Wellington does all the lobbying and schmoozing with politicians. NZUSA leaders usually go on to lead the country, or do other fancy things, but for those who remember Caity B - 2018’s OUSA President and current NZUSA VP - fancy probably isn't the word you’d use. She’s cool, talks shit and takes no shit. She’s equal part breatha and student politician. Critic caught up with her in Wellington to see how life is going in the capital.

What does a typical week look like for you?

That is the hardest question in the world. I would say… James (Ranstead, not Heath) is the face and I am the brains. I do everything Thursdays in Black and all operations. Finances mainly … some people think that’s quick but it takes fucking hours on ends.

It’s good. I think it is [what I expected it to be], but I also think it’s quite eye-opening how different it is from OUSA. You have so many people supporting you at OUSA, whether it be the student body, or the people criticizing you. OUSA, VUWSA and Canterbury kind of celebritize their president, so I think for me coming from that celebrity role, to here, where no one really knows who you are [is a change]. James does most of the external stuff in the media, so for me I’m just sort of here in the chain of getting shit done.

So who actually is in NZUSA?

Currently there is a President and a VP and then one 10-hour employee, who is the Pacific Liaison Officer that is currently setting up the National Pacific Student Body. The [National Women’s Rights Officer] is not elected, because of funding and limited resources this year we decided to have two full timers instead.

Why is your funding limited this year?

It was public that we suffered some financial difficulties last year, so this year we decided to cut back, try to save up a bit, try to re-establish ourselves. Is the model of having VP and Pres the best? It’s pretty hard only having two people. We do have some really dedicated volunteers that help us out, run campaigns, and rally people. Every student association needs volunteers and people who believe in it.

That sounds like a lot of work put on volunteers. Should they get paid?

I think yes and no. I think that’s up for you to decide if someone should be paid for all of their work. Students associations are in an interesting situation, because of VSM and lack of funding, but also you’re in a service role where you’re giving everything for who knows what. No one knows what you do. And actually I think time is the biggest resource we’re missing out on as well.

That’s one of our main priorities this year, but it’s a long-term thing.

Because it needs to be done right. It can’t be rushed. There are people working on it and getting shit done.

Meeting with MPs, getting coalition partners on side. When it comes out it’ll be loud, but it’s not the time right now to be loud.

Why is now not the time? Wasn’t VSM established 8 years ago?

How long we talking?

Hard to know. I do operations; you’ll have to ask James these questions, honestly.

Is NZUSA gonna be shit until VSM is repealed?

Well what do you expect NZUSA to be? What do you expect us to do? Last year was a quiet year for NZUSA - I’d never deny that. But do you think that there would have been as big a push on the postgraduate student allowance [campaign] without us? NZUSA did a rally, then OUSA did a rally, do you think that OUSA would have thought, let’s have a postgrad rally and lets see how many people we could get on nationally?

I think having a national body takes a little off of other peoples plate, and they can give as little or as much as they can. If OUSA had created a petition, cool. That’s one student’s association from the whole country. With NZUSA, you’ve got a collective voice.

Do you love your job?