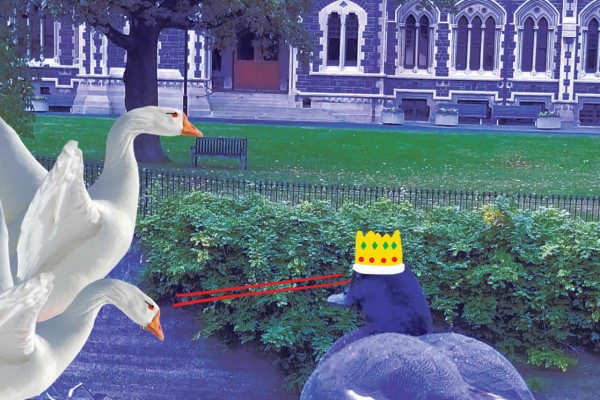 Who said there wasn’t good news in the world?

Say you’re a duck, right? Say you’re a duck, and your leg is busted up. Classic. Probably got into a fight with an evil goose gang while trying to defend some helpless babies or something. Either way, on most University campuses, you’d probably be out of luck. But not at Otago, thanks to the Otago University Debating Society (OUDS).

Last Sunday, OUDS Vice President Grace Belworthy saw a duck plodding around on campus with an injured leg. Belworthy called DOC and the SPCA, but both were unable to act because, although it was a native bird, it wasn’t endangered. The duck subsequently disappeared, but Belworthy took matters into her own hands. She rounded up flatmate Joe Garry and friend Josh Meikle, and attempted to rescue the duck and get him to a vet. Unfortunately, the duck eluded the trio.

Grace put out the word to friends in the OUDS (Critic petitions they change their name to Otago University Duck Savers), and on Monday, member Dushanka Govender called in to report sighting the duck on North Ground. Again, the duck flew away before the team could rescue it. Later on, it was seen swimming in the Leith River, but sadly “it could only swim with one foot, and was being regularly attacked by other ducks,” said Joe Garry. Joe ran to buy a net, but after attempting to wade into the Leith to snag the duck, it escaped again. A second attempt failed after the duck wiggled free of the net, and subsequent attempts continued to tank, as the duck led the team on a wild chase around campus.

Eventually, a character Joe referred to as “Big Boy Seth” arrived on scene. Big Boy Seth nearly snagged the duck (now christened Bill Duckerman), but again it made a getaway, “dashing through crowds of parents and year 13s,” Joe reported.

But the team had a plan. An OUDS member, Matt, had discovered the location of the duck’s sleeping quarters. Late that night, a group of nine comrades gathered (Fellowship of the Duck, anyone?), including the mysterious leader of a local Instagram account @dunedinducks. “Seth built a bigger net from a hula hoop, an old T-shirt, and a stick,” said Joe. “We practiced duck catching on the two smallest members of our group, and devised a plan,” using a WikiHow page entitled ‘How to Catch a Duck’.

Seth approached Duckerman from behind with one net, Matt in the front with the other one. Duckerman jumped into Matt's smaller net, and then Seth put his bigger net over Matt's, finally capturing the wily bird. “We drove him to Humanimals vet in South Dunedin,” Garry reported, “because the Mornington vet said she would only get out of bed for an emergency, and a duck doesn't count as an emergency.” Shame on you, Mornington!

Duckerman was reportedly diagnosed with an infection in his leg, then given painkillers, antibiotics, and anti-inflammatory drugs. He spent the night in the vet, and has recently been transferred to Dunedin Wildlife Hospital. “We're hoping he's dropped off where we picked him up from,” added Garry, “so he can go back with his duck friends”.