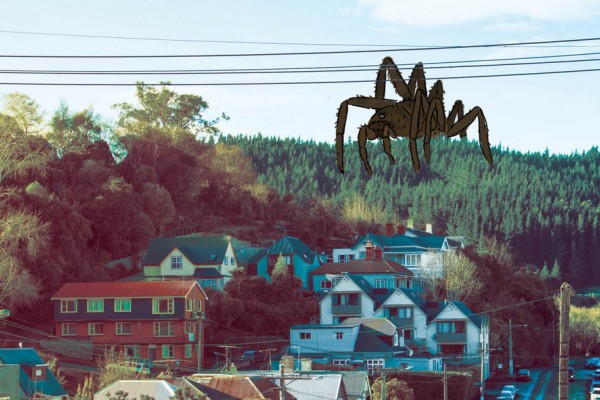 “I realised I couldn’t get rid of them so I sorta just let them live here now.” This is the stellar attitude of the self-proclaimed “Spider Queen of North Dunedin.”

Many North D flatters have reported an up-swing in the residential arachnid population. This comes at the helm of a – probably closely related – up-swing in the local black fly population. Not ones to shy from important journalism, Critic launched an investigation into why student flats are suddenly awash with the 8-legged critters.

First things first: spiders are your friends. In fact they might be the best flatmate you could ask for. Spiders don’t eat your food, don’t steal your booze, and never leave their MoonCup on the sink. They even get rid of pests. We, as a community, ought to be grateful (even if they don’t pay rent).

Spider Queen learned early that cohabitation with these creepy-crawlies isn’t a bad deal. “There’s usually one or two about when I get home. I say ‘hi,’ and let them do their thing.”

Not everybody is so enthused, though. What’s been seen as an “Arachnid Invasion” has been met with fire and fury from many North D flatters. Many reported trying to kill their newest pals, with variable success.

So how do we best respond? “I wouldn’t worry about it,” said a PhD student in the Zoology department, “besides, do you have any idea how many spiders there are, really? There’s heaps. Always will be.”

Since the population can’t be quelled, the best way to avoid spiders in the home is to make the home unattractive to them. Spiders feed on smaller insects, and those insects are attracted to food and filth. So, if you don’t want spiders, you’ll have to do your damn dishes every now and then, and stop letting your mates make a sticky mess of the pong table.

Unfortunately, cleaning every once in a blue moon may not be enough. Spiders don’t love the cold any more than you or I, and so in these increasingly dreary days they seek refuge in your flat.

But are they a danger? Do they bite? I can’t say I know the answer, but the Spider Queen of North Dunedin has something to show for her continued mutualism with the buggers. “Yeah, look,” she said, and begins to lift her shirt. This was at first alluring (was I about to get it on with the Spider Queen of North D?) but quickly turned disturbing, as she revealed two large, Nitro-red bullseye bites on her midrib. “I hope it wasn’t one of my spiders, I like to think they’re friendly. But maybe I slept on one and pissed it off.”

So, takeaways: spiders are here to eat your bugs and enjoy your warmth. There’re too many to kill. They probably don’t bite, but just like with any flatmate, it’s best if you don’t let them in your bed.