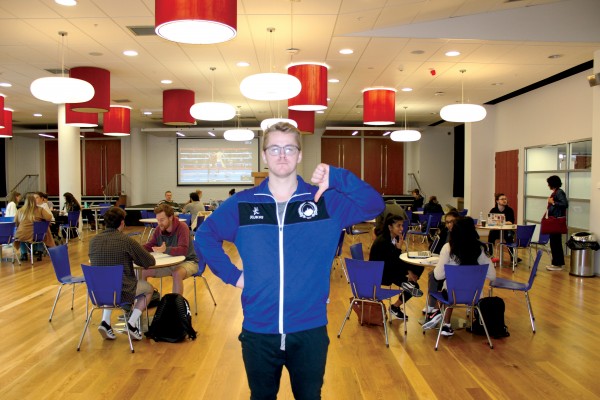 The Biggest Problem with the Main Common Room: It’s Not a Common Room

EDITORIAL: If you were at all of the OUSA election debates (lol don’t worry, I know you weren’t), you may have noticed something: with the exception of the President’s Debate at UBar, no one showed up.

To put things in perspective: the Thursday night President’s Debate at UBar got 135 people to show up. Just one day prior, OUSA had another Presidential Debate, at midday at the Main Common Room (MCR). There were maybe 20 people there, tops. And all of them were exec members, other candidates, close friends of candidates, and two unfortunate Critic reporters.

Admittedly UBar has beer and MCR doesn’t, but still.

OUSA relies on the MCR as its main meeting space. It’s where they hold forums, Student General Meetings, and where visiting politicians speak. But they never get big crowds because it’s just an awkward space to be in.

It’s a weird, open space, with some tables that manage to both fit very few people and simultaneously take up an incredible amount of room. It doesn’t seem to serve any purpose apart from overflow space from the food court.

Throw some couches and beanbags in there. Make it a decent hangout space where people can take a break. Chuck a foosball table or a ping-pong table in there. Hell, there’s a pool table in the food court for no good reason, why not move it 20 metres over and put it somewhere actually logical?

If you create a space where people actually want to spend a bit of time, it’s not going to be weird for them to show up for a big event. It’ll be natural. When OUSA tries to do meetings in the MCR people awkwardly mill around the edges, but never venture close to the stage because it doesn’t feel welcoming.

The problem is that the MCR, like Union Hall and UBar, isn’t owned by OUSA. It’s owned by a separate company called University Union, which is owned 50/50 by OUSA and the Uni.

University Union doesn’t have the same priorities as OUSA, and OUSA doesn’t seem to have any power to make them do what they want. Union doesn’t want to put anything good in MCR because they use it for events and gigs, so they like being able to easily clear away the tables and chairs.

But that seems short sighted and a real misuse of what could be a really valuable space for students. The Hub at the Polytech is full of tables and sofas; it’s a natural spot to meet up and yarn, but they have no problem repurposing the area for functions.

Here’s a list of common areas that make decent spots to meet up and take a break: The Link, the Business School Atrium, round the back of St David, round the front of St David, the Central Library toilets (for sex), the Staff Club (for sex), Union Lawn (for sex with fire-dancers). One that’s not on there is the Main Common Room. Because it’s not a Common Room.