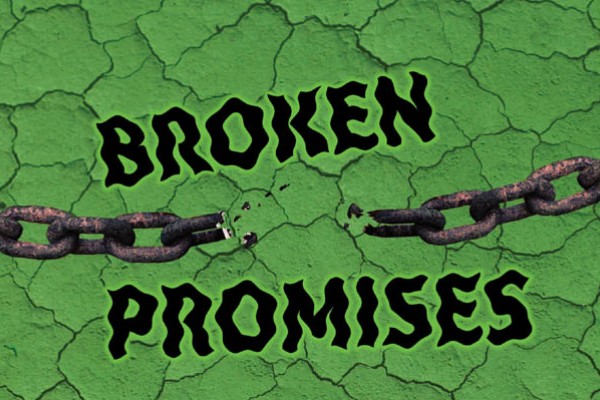 James and the Giant Pile of Broken Promises

OPINION: In 2012, Francisco Hernandez was elected OUSA President with a manifesto (or “Franifesto”) containing over 100 policies. He spent the following year meticulously checking his progress against these pledges, eventually delivering around two-thirds of what he’d promised and making a good-faith effort on most of the rest.

In 2016, four members of the Your Voice ticket, including current presidential candidate James Heath, were elected on a platform of buying a food truck to sell fries to drunk students. (Priorities.) They immediately ditched their flagship policy to curry favour with their new colleagues (many of whom rightly hated the policy). When challenged about this last year, James tried to paint his ticket’s actions as a noble gesture of compromise. Like Mandela, or something.

Last year James was re-elected to the Executive with two pledges, one of which he’s implemented and one of which has run aground on the rocks of OUSA’s employment policy. But he also joined the Unity ticket, who collectively offered a ridiculous platform of vague buzzphrases (“maximise experience”; “ensure best health”), and a promise to build a “wellness centre” to address student mental health issues. The centre hadn’t been costed; nobody could say where the funding was meant to come from, where the centre would be located, or how many students the centre could actually treat; and the implications—administrative, legal, cultural—of turning OUSA into a healthcare provider weren’t even addressed.

Even though seven members of Unity were elected, a clear majority of the exec, and the wellness centre was their flagship policy, we haven’t heard a single peep about it this year. It’s almost as though the policy were complete bullshit and none of them actually believed in it.

(Side note: when I contacted James before this article went to print, he insisted that the wellness centre was “not my policy” and that he had “made this clear during the election” last year, which would come as a great surprise to anybody who followed that contest.)

James, Roger Yan, Norhan El Sanjak, and Josh Smythe are all former Unity candidates who are running for re-election this year despite completely failing to deliver on the promises they’d made, stupid as those promises were.

At the time of writing, James has publicly announced just one real pledge in his bid for president—a voter drive ahead of the DCC elections. In further correspondence, he’s outlined a few more, mostly continuations of ongoing projects but also measures to improve OUSA’s engagement with te ao Māori. These are good policies, but they hardly amount to a vision, or even a platform. And based on his record—two elections won and a series of major promises abandoned—it’s fair to question why we should believe him.

It’s worth remembering that James had already served on the exec for a year when he attached his name to the wellness centre, despite the idea’s many, obvious, and crippling flaws. Either he still hadn't figured out what OUSA actually does, which makes him an idiot, or he thinks policies are just a thing you say to get elected, which makes him all the worst cliches about politicians.

James is the most experienced candidate for president and he’s probably going to win. But if he really wants to improve OUSA’s engagement with regular students, he’ll need to dispel the image of student politicians as self-serving and insincere. And unless he can account for his history of idiotic, empty promises, he’s the wrong person to do that.