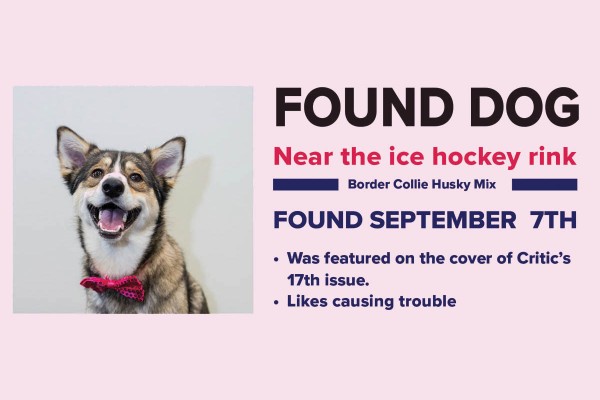 She’s graced the cover of New Zealand’s best dog-related student magazine, and now her fame has got her out of trouble with the law.

Maya, the beautiful border collie – husky cross that graced the cover of GOODBOY magazine (better known as the Critic Dogs Issue), escaped her backyard last Friday, but was saved from spending a weekend in the pound after a reader recognised her from the cover of the magazine, and found her owner’s name in the article about her.

Anthony Doornbos, OUSA Designer and Maya’s owner, said that Maya was “A bit of an escape artist”. Over the past few months, she has made several escapes by jumping through windows and over fences, and has repeatedly got picked up by Animal Control.

Anthony bought a perimeter column, which worked for a while but then broke. Last week he and his partner left the house to get a drink at New New New, hoping that the broken collar would at least be enough of a mind-game to trick Maya into not escaping.

Unfortunately it didn’t work. While at the brewery, Anthony got a Facebook request from a woman he had never heard of before, which he at first “thought was a scam,” but turned out to be a message saying “I think we have your dog”.

Amelia Walker had found Maya outside the Dunedin Ice Stadium, and called Animal Control, but before they showed up remembered that her friend had showed her the Critic cover with Maya’s photo, put together that it was the same dog, found the article, and Facebooked Anthony.

“It must have been one hell of a fast Facebook stalk, because she found me within minutes.”

Anothny raced across town to get there before Animal Control, and although he was late, he was able to rescue Maya from the back of the truck before they took her away.

“The cover, and the fame she got from it saved her from a weekend in the pound.”