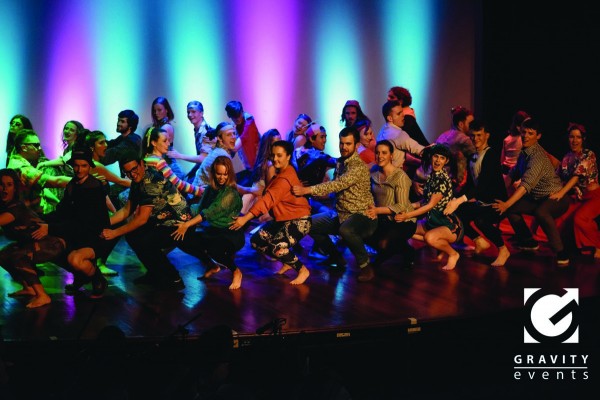 Every year a bunch of law students and a bunch of med students get together and try to be funny. Critic reviews how successful they were.

Med Revue, despite being punishingly long at well over three hours and punishingly full of puns, wasn’t as shit as I was expecting.

Some of the jokes were legitimately funny, particularly the ones that weren’t just repeating a generic med in-joke, like how people who take Dentistry, Pharmacy and Physio are inferior to Med students (height of comedy right there guys). Of particular note were the video skit about the epic journey Aquinas students have to undertake to reach uni and the skit where a group of students flaunting that they’re in Med have to actually deal with a medical emergency; self-aware humour always goes down well.

The decision to base the show around Mamma Mia! was also a good one. It meant that when the show’s pace was faltering (which, because the show was longer than the Lord of the Rings Extended Cut, was often) they could get the audience easily back on board with a recognisable ABBA banger. Also, the choreography was exceptional, which was cool and surprising.

However, with some exceptions it did feel like someone had told the writers that puns are the only form of humour. There’s a reason that you don’t see comedians or comedy shows base large chunks of content on puns; while the first three consecutive science-word puns might be funny, by the tenth it starts to grate.

There was a lot of male nudity, with two penises seen, one quite extensively. A Critic mole backstage said that before the scene the two guys in question were rubbing their penises to make them seem bigger before going on stage, which was awkward for everyone.

It was kind of racist in parts. The Māori lecturer, whose whole joke was that he spoke in a stereotypical Māori accent, was really cringe. Although, to be fair, from talking to people who also attended last year’s revue, this year’s racism level is way down. Which is cool I guess?

The Presenter Man at the start threw some shade at Critic, saying “In the past some people, and I’m looking at you The Critic, have reported that this show is made by people who lack empathy and are in a lofty position purely by being in Medical School. Now look, to avoid such events, you need to know: this show is a joke, we do care and you’re more than welcome to your wrong opinion, just don’t go around sharing.” Fuck you, Mr Presenter Man. We’re not called “The Critic” and we’ll continue to share our wrong opinion until this University crumbles into dust.

Grade: A- (Not enough to get into Med)

Law Revue was forgettable, not just for the audience but also the cast who were mostly drunk during the shows. The funniest moment was when OUSA President Caitlin Barlow-Groome entered the second half late with an armful of snacks while everyone was quiet. My other highlight was starting a round of applause.

The overarching plot of Law Revue was its redeeming feature. Inspired by Back to the Future, it centred on Marty McFly and Associate Professor Colin Gavaghan travelling back to 1998. The goal was to stop then exchange student Harlene Hayne from being humiliated at Law Ball which would make her hate the Law Department as Vice Chancellor. Marty also met his mum and managed to father himself.

The ‘90s setting meant an ungodly number of jokes about David Bain and Princess Diana. One joke about David Bain is funny, but five? Not so much. Most of the jokes garnered mediocre laugh levels and there were a decent number of awkward silences. The best joke was when Orange Man did a roly poly across the stage, an ‘Electoral Roll’. Another good laugh was about Pitbull dying after being mauled by pitbulls in 2019. The fact that these were highlights kind of demonstrate the quality of humour.

The ode to Mark Henaghan was a bit cringe. Nudity was less than Med Revue apart from when all the male students stripped at the end. The videography was probably good? But the Wednesday night show didn’t get to see the videos due to technical difficulties. Sad. Do you know what was really great about Law Revue that could put it ahead of Med Revue? It wasn’t racist.

Every time the curtain went up you could see Law students partying at the back of Castle. In the part where everyone bows and gets clapped so many cast members appeared that I don’t remember being in the show. But, like I said, it was forgettable so who knows. Anyway, it seems like the cast were having more fun than the audience. Potentially so much fun that they didn’t practice that much before the shows. At least they had fun.