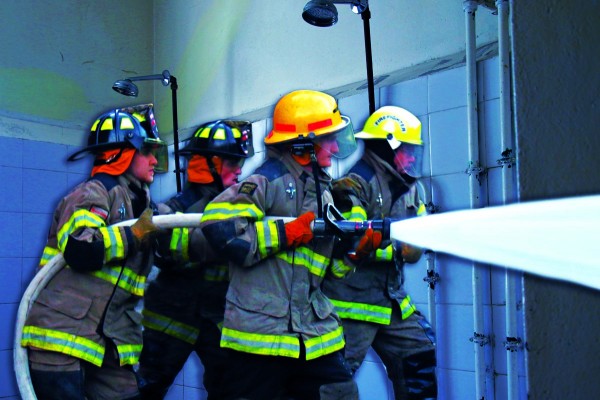 “The dirty buggers [Canterbury students] were stealing our hot water!”

Two fire engines were called to an Otago Uni Geology camp in Omaui after shower steam set off the fire alarm.

A group of students studying Igneous Petrology and Volcanology were staying at the Omaui YMCA lodge for an exciting weekend of looking at rocks around Bluff.

The “deafening” fire alarm went off around 10:30pm on Saturday night said student Chelle Fitzgerald. She said the alarm was one of those “fucking crazy ones” that can only be turned off by the fire department.

“Because we were in the middle of nowhere, the two fire engines had to come from the nearest town, and it took over half an hour for them to get there.”

One of the fire respondents was out for dinner when the call came and the Geology students felt sorry for him. Another Invercargill fire respondent said, "What else are we going to do on a Saturday night?"

After offering him some cans of V, a packet of Mi Goreng, a Speight’s hat, and a bunch of ODTs that have had the ODT Watch cut out of them, Critic got an exclusive interview with Alex, who was in the shower when the alarm went off.

“After about 15 to 20 guys already had showers… it was so steamy, like a hot box pretty much.” Alex said he may or may not have accidentally left the door open, allowing steam to escape toward the fire alarm in the hallway.

When the fire alarm went off, “we were like ‘for fuck’s sake I'm so not getting out for that,’ it will just be something in the kitchen and we’ll just get out if someone comes and gets us. Anyway next thing you know someone tells us that it was steam from the showers,” said Alex.

According to Chelle, a second alarm could only be turned off by lodge management, so lecturer Dr. Michael Palin “duct-taped over it to try and muffle the sound so we could get some sleep.”

Dr. Palin blamed Canterbury students for setting off the alarm. ​“The dirty buggers were stealing our hot water!”

There was no damage to the facility and no word on whether the Geology Department will need to pay for the call out.