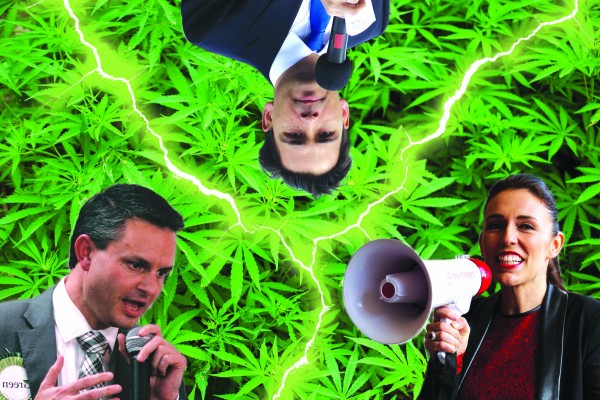 New Zealand now has cross-party support on medicinal marijuana. And 78% of New Zealanders are in favour of legalising medicinal marijuana for pain relief, according to a Drug Foundation research poll. But, no political party is willing to put their name to another party’s Bill on the issue. Politicians are letting their own petty bullshit get in the way of addressing an issue New Zealanders broadly agree on.

Three Bills have been proposed with different visions of medicinal marijuana.

In February, the Green Party proposed a Bill that would have allowed people with health conditions like terminal illness, chronic pain or immune system disorders to legally grow their own cannabis, or have someone else grow it for them, if prescribed by their doctor. Chlöe Swarbrick fronted the Bill and it was endorsed by GreyPower and Helen Clark. But, the Bill was voted down at first reading. Although it was a conscience vote, National and NZ First MPs all voted against it.

In April came the Government Bill headed by David Clark. Rather than making medicinal marijuana ‘legal’, it makes marijuana ‘not illegal’ for those who are terminally ill with a year left to live. It also removes cannabidiol (CBD) products from being classed as a controlled drug, to comply with the World Health Organisation’s finding last year that CBD “does not appear to have abuse potential or cause harm”. Finally, the Bill allows for regulations of domestic supply of medicinal cannabis products, but doesn’t make any suggestions towards what these regulations would look like. Labour says the Bill is so conservative because that’s all NZ First would agree to.

National’s Bill does not have a ‘grow-your-own’ provision, but it goes a lot further in some areas than the Government’s proposal. As under Chlöe Swarbrick’s Bill, National’s Bill would create a ‘Medicinal Cannabis Card’ which would be issued to people based on criteria decided by the medical profession. Cardholders would be able to purchase approved medicinal cannabis products without a prescription. It also places pretty arbitrary licensing and hiring regulations on cultivators and manufacturers, which prevent them from operating within 5km of residential land or hiring staff who have had, even minor drug offences.

Each party’s Bill contains interesting ideas. But surely all these ideas could have been considered within the debate on one Bill? With more negotiation at a higher level, some of National’s ideas could have been added to the Government Bill, or the Green’s Bill could have been toned down over the Select Committee process. Labour’s Bill has proceeded to Second Reading, so some of National’s suggestions can still be included via Supplementary Order Papers. But it displays a stunning lack of efficiency that three separate Bills have had to be made on basically the same thing.

It’s a bit of a confusing mess. It seems like a petty argument with your sibling where you can’t admit you agree just because you’re annoyed. Regardless of your views on medicinal marijuana, it is pretty worrying to see politicians be so unwilling to listen to each other that they can’t take action on something they broadly agree on.