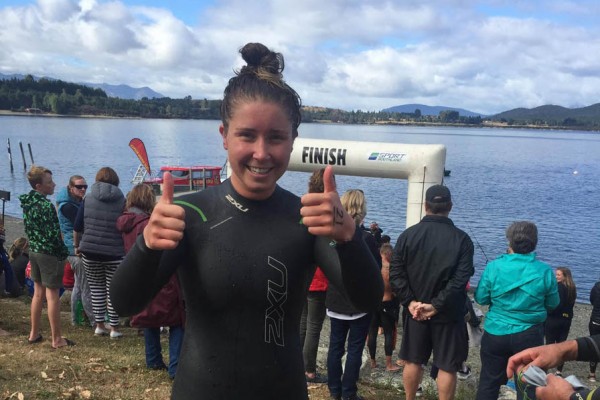 Hannah Morgan is a swimmer. Not a ‘yes I swim laps at Moana Pool every now and then’ kind of swimmer. She’s an open ocean swimmer and, in February next year, she’s going to swim the Foveaux Strait. You know, that shark-infested stretch of sub-Antarctic water separating the South Island from Stewart Island.

“In a straight line it’s 12km, but because of currents and tides no one’s done it in less than 17km. It depends on how off track you go,” she said. Hannah will have a support boat for feeding and in case sharks come along, but otherwise is allowed no physical assistance. “To as much as I can control it’s up to me.”

Only eight people have ever done the Foveaux Strait swim solo. And you can understand why. To be officially recorded she can’t wear a wetsuit. “It’s due to buoyancy. I’ll just be in a standard one piece. I can put some vaseline on myself to insulate, but it’s nothing on a suit.” The water temperatures around that time will be around 14 degrees. “I probably won’t be able to put my head under before I acclimatise.”

Hannah isn’t doing her swim alone. The Riverton Coast Guard offered to be her support boat, and she’ll have support swimmers who have connections with some of the people she’s swimming for. “They’re only allowed to do an hour with me at a time, and then I have to have an hour by myself. I’ll probably have three for the company.”

It’s still a long time by herself; the swim could take up to thirteen hours. “Hopefully it’s well less than that though,” Hannah said. “Physically it’ll be fine, it’s mentally getting across that’s the hardest part. The tide will be going against me for some of the swim so I’ll essentially be going backwards.”

Six months out and each week Hannah crams in about 40km in the pool and ten to twelve sessions of cross-training at the gym. At the moment she’s training at Moana Pool but will move to the Otago Harbour once the weather warms up in September. Does she manage to find time to study? “Barely.”

Hannah used to be a long distance freestyle swimmer. She was on the national team. But, at 17 she said she got to “a pretty bad place” and had to give it up for her own wellbeing.

“When I got to University I realised I still needed physical outlet. I’m a pretty competitive person so decided to go to open water,” she said.

Then, things going on her life pushed her to put that swimming towards a greater cause.

Over the last two and a half years, Hannah says she has experienced more tragedy than she ever did growing up. She’s had to support friends through mental illness and grief, been in a dark place herself at times, and lost a close friend to suicide last year. “I decided to transfer what I’m good at to benefit other people.”

She set her sights on the Foveaux Strait and launched a campaign called ‘Swim Strait for Life’ to draw attention to mental health and wellbeing. She’s fundraising for the Mental Health Foundation and OUSA Student Support.

She chose the Mental Health Foundation, as she wants the message “to stretch wide and not just be within the University or my friend group. I want it to be heard”.

Her interests aren’t just in Dunedin. She also wants to raise awareness of the rapid decline in wellbeing of male youth in Southland, where she went to high school.

She likes the Mental Health Foundation’s approach of emphasising mental wellbeing as well as mental illness. “Although talking about mental illness is important, I want to focus on preventative action rather than only responding to [problems only when they appear].”

“Most often mental illnesses start off in an intermediate stage where people have a bad mentality and it just kind of progresses. If we can stop it at that point then it stops it later on.” She’s talking about being healthy in yourself, having a good mindset, knowing that it’s alright to have a bad day but not downplaying what you’re feeling. “Even if someone isn’t diagnosed, we still need to address how they are. I feel like New Zealand is missing that lower level of conversation.”

Hannah’s donating to OUSA Student Support to support mental wellbeing on the local level. “I’ve never been around so many people who are struggling than I have at University.” She wants the work of OUSA Student Support to be even more accessible and widely advertised, particularly for people who are supporting others going through tough times. “Being a support person is really hard, but there is help available so you’re not just sitting there listening and going downhill yourself.”

Hannah’s grateful that she has “lots of people around to keep me in check”. Her mum, friends, the Mental Health Foundation and OUSA are all supporting her through the campaign and swim. She used to train with the last person to swim the Foveaux Strait who has been giving her tips on planning and caring for her body. “I’ve also got an awesome training group at the pool.” These are the kind of support networks she wants to promote in the mental health awareness campaign.

“I could have chosen something easier, but it wouldn’t have the same effect. Because of the cause I know that I can keep going. It will be well worth it in the end.”