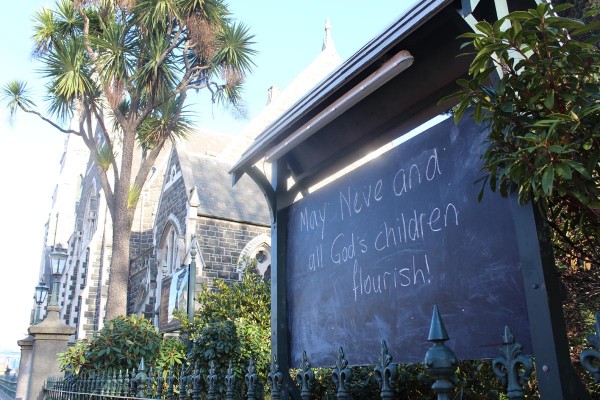 Getting Winston Peters to choose Labour credited as her first miracle

In a move that probably should have caused more controversy, Knox Presbyterian Church has confirmed New Zealand’s Prime Minister Jacinda Ardern as God, the supreme being.

The church recently wrote “May Neve and all God’s children flourish!” on their blackboard facing the street, clearly stating that Jacinda, as the parent of Neve, God’s child, is God herself.

Critic are able to confirm that three men were in the vicinity of Neve’s birth, and as they were all doctors had to be at least sufficiently wise to attend medical school. Critic knows some med students and admits that the bar isn’t particularly high.

Critic has not approached Clarke Gayford for comment on whether Neve had an immaculate conception as it would have been awkward and uncomfortable.

Leader of the Opposition Simon Bridges said of the church’s statement, “Well I wasn’t aware of Jacinda’s divinity up till now, but if a church has said something, then that thing must be true.”

Critic did not approach Jacinda’s corporeal form for comment, but we did offer her some prayers and sacrificed a goat in her honour (we don’t know what Presbyterians believe and neither do you). Some time later Critic saw a cloud shaped like a sausage and watched a swallow fly north to south, then change its mind and turn east; clearly Jacinda was saying “I appreciate the compliment from Knox Church, however I am not the divine omniscience force that created and controls the universe, I am the democratically elected Prime Minister of New Zealand”.