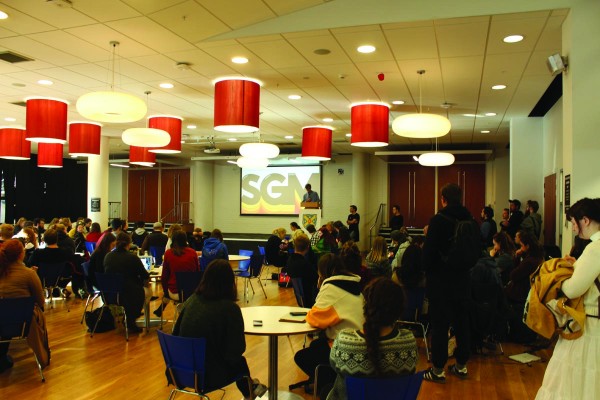 Kirio Birks, OUSA Postgraduate Officer, has avoided being removed from his position by a margin of two votes after a motion for a vote of no confidence in him was raised at a Student General Meeting last Friday.

Matthew Schep, postgraduate student, introduced the motion, claiming that Kirio had not been fulfilling his job responsibilities and advocating for postgraduate students. Matthew described Kirio’s work as “lacklustre and tokenistic”. “What is the point of having a representative on the executive if they do not represent us?” said Schep.

Nine students spoke against Kirio, while four spoke in support of him.

Sinead Gill, a postgraduate student, said Kirio was “a good guy but he is a shit representative”.

Greg Hughson, University Chaplain, condemned the meeting as a “public trial”. He said that Kirio has “contributed well” to the university committees they both sit on.

Postgraduate student Isaac, who had worked with Kirio, said that “Just because you hear from a few voices that have talked to Kirio and not gotten the exact response they wanted, doesn’t mean that he hasn’t done a lot of work for postgrads”.

Abigail Clark, OUSA Welfare Officer, and Umi Asaka, OUSA International Officer said they had seen him do “excellent work” and pointed out that because his time is taken up a lot by committees he does not have the time to reach out to every student.
In a speech to defend himself, Kirio said that the 10 hour a week position Postgrad Officer position is not sufficient for “good postgraduate representation; you need more people.”

“OUSA does not do the political stuff it should be doing, because it is an association that has chosen, by design, to work with the university closely and intimately so that we can make particular changes on committees.” He said that, taking this into account, “In this role I’m going to sit on committees. I have a $1500 budget; I cannot afford to be out there campaigning and I will not waste money to do so.”

The 123 students present then voted using the archaic system of raising hands. Kirio was given the option to leave, but chose to stay in the room during the vote. 53 people voted against him and 31 voted for. 39 people chose not to vote. Tim Austen, who chaired the meeting, announced that the motion had passed and Kirio was removed from office.

BUT THERE WAS A TWIST.

According to arcane OUSA lore, two-thirds of the students that voted must vote against someone for a vote of no confidence to be successful. The ratio came out at 64.6% (Critic got someone else to do the math) which meant that the motion was two people changing their minds off passing. Critic hasn’t been this excited since, well, last Tuesday, when we discovered that the uni had stolen our magazines.

Anyway, after some kerfuffle and maths, the moderator announced that Kirio is still the Postgrad Officer.

Matthew Schep told Critic afterwards that while his motion lost, he’s happy that students “got the opportunity to hold Kirio to account”.  He said that hopefully the meeting “serves as a warning call to anyone who is on the exec now or who will be in future years that these processes do exist and we have the right to use them if they are not performing in their role the way they should be”.

Kirio Birks told Critic that “I'm humbled by the love and support shown by those who spoke in my favour. This was an incredibly close call. Today we saw student politics at its most passionate in a long while. This is a perfect time to get back to work and get stuck in.”

This SGM was better than Critic’s wildest dreams.