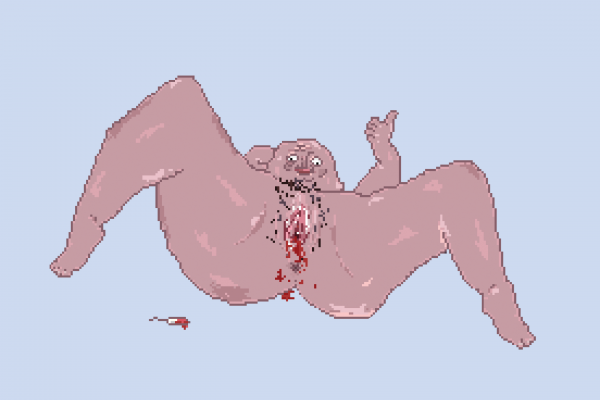 What the heck just happened?

If you were wondering why there were no copies of Critic on campus last week and don’t follow any news outlets in the world, last Monday 2000 copies of Critic’s Menstruation Issue were siezed and destroyed by Campus Watch in a night-time raid because of its cover illustration depicting a menstruating person.

Here’s what happened: at 7pm Monday, we noticed that a number of campus stands were empty. We checked the stands again on Tuesday morning and realised that there’d been a theft, not just an unusually high pick-up.

We were missing around 2000 copies. The university claims that there were 500 copies destroyed, but we question those numbers. “How would they know how many issues constitute a stand?” said Charlie O’Mannin, Critic News Editor. “That number was pulled out of their arse.”

Around noon on Tuesday, Joel got an email for Vice Chancellor Harlene Hayne saying “I did want to let you know that this week’s issue of the Critic is particularly good.”
Hunting for the missing copies, Joel emailed Property Services who said it  “categorically” wasn’t them. They pointed us to Campus Watch, who have CCTV footage. They said they would look into it.

We posted on our Facebook page that the copies had been taken, expressed how disheartened we were, and asked anyone who knew who was responsible to get in touch.
Stuff, Newshub and the Otago Daily Times called us and wrote stories about the mystery of the missing issues. They all reached out to the University for comment.

At 6pm the University sent out a press release in response to the requests which said that Campus Watch had thrown out the issues because the cover was “objectionable” and children might see it.

This was the first we heard that the University had any problems with the issue. We found out in the same way and at the same time as the rest of the media.

The University said it “has no official view on the content of this week’s magazine. However, [we are] aware that University staff members, and members of the public, have expressed an opinion that the cover of this issue was degrading to women.”

This “really pissed us off,” said Joel. “I read that as a backhanded attack on our magazine and a personal insult to the integrity of our staff and the Otago Women’s+ Club who suggested we do a menstruation issue. They didn’t even have the integrity to put their own name to it.”
"The statement weirdly tried to say that the removal of copies was an error but also hinted that they kinda supported that removal."

After the story blew up in national media, the University released another statement. They said it was "a mistake and never intended as censorship.” They said the removal of magazines was “an incorrect assumption by staff in the Proctor’s office.” So, basically they’re saying Campus Watch went rogue.

Critic staff had removed copies from the Dunedin Public Hospital upon request. The request was not because of the cover but because they wanted the foyer to be exclusively for SDHB material. They suggested we move them to the Medical School.

We don't know how Campus Watch found out about this, but they apparently thought it meant every copy on campus had to be destroyed.

They never contacted Critic about this.

Despite reports, Critic was not removed from the Public Library. All copies were picked up by members of the public, according to Bernie Hawke, the Dunedin City Council library services manager. Hawke also said that there were no complaints.

The chief censor's office told RNZ that the cover was not legally objectionable. "The image is not sexualised, nor is it particularly degrading or dehumanising.”

17 former Editors of Critic, including Editor-in-Chief of Stuff Patrick Crewdson and former Green Party MP Holly Walker, penned an open letter to the University expressing "deep concern" and calling for the university to "apologise unreservedly".

"Universities should be environments where students and lecturers alike are free to express their minds and debate ideas.”

"The decision by the university to confiscate without warning Critic's latest issue is directly contrary to these ideals."

The Proctor Dave Scott apologised to Joel on Wednesday. Joel says “he was genuinely sincere."

Since the copies were destroyed by the University, the story has become a media sensation. We were contacted by CNN, BBC, Reuters, the New York Times, the Australian Associated Press, the Guardian, Newshub, One News, The Project, Stuff, NZ Herald, TVNZ Breakfast, Radio New Zealand, Radio Live, Newstalk ZB, Triple J,  and, most importantly, The Otago Daily Motherfucking Times.

We hope you’ve had good conversations this week and heard a range of perspectives on our cover and the topic of menstruation. We certainly have. Periods can be gross. But, they’re completely normal. Let’s be okay with that.