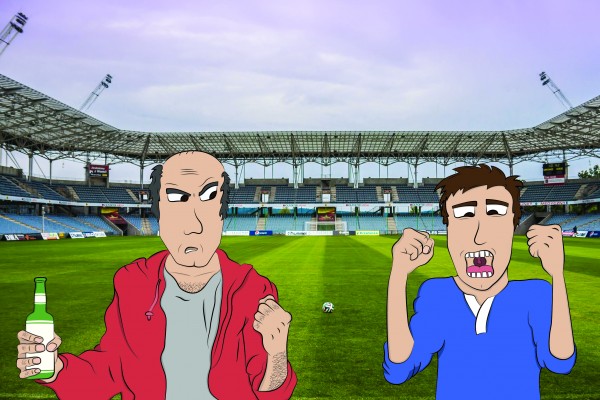 How To: Talk Sports With Your Dad

But back to your dad. He’s old. It’s not his fault that he’s old, but he is in fact very old. The fact that your dad is so old can make it hard to talk to your dad about certain things, stuff like relationships, or electricity. And sometimes, it even interferes with talking to him about the one thing he loves more than all of the stuff he loves more than you: Sports.

All dads love sports, this is the third fact of life, but I didn’t bother listing it because everybody already knows it. It’s the one thing that you can always talk to him about and probably have him acknowledge you as his child over (if you make a subjectively good point – in his mind). Remember the “in his mind” part.

Despite your shared love of sports, this can be really fucking difficult. He’ll inevitably harp on about the ‘good old days,’ when Buck Shelford kept playing without a nut, Don Bradman was playing cricket, and basketball wasn’t ‘soft’. Luckily, I’ve put together a handy manual to get you through:

STEP ONE: CALL YOUR DAD

The most simple but also probably the most elusive step. I’d strongly advise against using your ‘cellular device,’ as he thinks that those are a waste of time and even if he had one he wouldn’t answer it. You’ll have to brave the landline here, and just pray that he isn’t either sick of your shit or out mowing the lawns.

So you’ve somehow got the old man on the blower, this is where things get difficult. I like to go with a simple dialogue as follows:

Me: Hey Dad, I’m playing sports! You like them, right?

Dad: I fucking love sports (more than you), have you scored a fucking run yet this cricket season?

Me: No…but I’d still love to talk about sports with you!

Okay, you’re in. I’d advise starting with a few generic points, and avoid talking about things like Beauden Barrett, Steph Curry or Steve Smith. Your Dad fucking hates these ‘pretenders,’ and will not hear a word in favour of anyone other than Andrew Mehrtens, Michael Jordan or Don Bradman as the best to do it. Be smart out there, and throw in phrases such as “defence wins championships”. He’ll love it.

Don’t bring up things like analytics or the Sunwolves, because your old dumb dad doesn’t know what those things are. Begin with a slick reference to someone like Colin Meads or another dead guy that your dad probably played rugby with. He will appreciate it, and his inferior old brain will be tricked into thinking that you’re also old, because why would a cool young person ever bring up a geezer like Colin Meads?

Wikipedia is your best friend here, so use it a fuckload. Your old man will inevitably bring up “Bodyline” or “The Seattle Supersonics” at some point, and this is when you prove your worth (please dad). Comparisons are also a great shout here, so let me run you through it:

Me: Man, that Beauden Barrett is electric, eh?

Dad: Indeed, he bears a close resemblance to Carlos Spencer.

Me: Oh yeah, Carlos James Spencer, the former New Zealand rugby union footballer who played at fly-half for the Blues and Lions in Super Rugby and for New Zealand internationally. I think what I like most about Carlos Spencer is that he won three Super Rugby titles with the Blues. His nickname was King Carlos.

WHATEVER you do, do NOT mention Steph Curry. Dads hate Steph Curry, because he’s young and cool and is still married (unlike your dad). My advice: whenever you would normally mention Steph Curry in a basketball conversation with a cool, young human, replace the words “Steph Curry” with “George Gervin” when talking to your old man. I don’t actually know who George Gervin is, but your dad will love it. Here’s an example for you:

Dad: Who do you think is the best 2-point shooter of all time? Wow that was weird, not sure why I said 2-point shooter seeing as 2 is the maximum amount of points you can make with a basket from anywhere on the court, so specifically saying “2-point” was unnecessary.

Me: Honestly, I’d have to give it to 2014-2016 MVP George Gervin, what a talent he is. He drains half-court shots like they’re layups. It’s like nothing the NBA has ever seen. George “Chef” Gervin is easily the GOAT shooter.

I’ll never forget the first time I name-dropped Richard Hadlee in front of my pops, he looked down at seven-year-old me and, with pride in his eyes, asked “Nice. What’s your name again?”

STEP SIX: GIVE HIM YOUR TOP TWO

With most of your mates, you’d probably go into some serious depth here; say top 10 or 20. That would be a cardinal mistake here. Let’s take cricket for example – as far as he’s concerned, New Zealand has only ever had two good cricketers. The two players on his list are Richard Hadlee and Martin Crowe. The list only really changes depending on if your dad is from the South Island (Hadlee) or the North Island (Crowe). Personally, I know my dad is from the North Island, so his list goes:

Just make sure you know what order your dad’s list is in before you bring up the top 2 list. Getting this part wrong could ruin your relationship with your father, which is already pretty bad. Also don’t try to mention Kane Williamson, that was a fucking shit show.

This is the easiest part of the whole guide, because by now I’m almost positive that you’re sick of talking to your old dad. The best way to end the conversation with your dad is to silently hang up right as he starts talking about “The Golden Age” (it’ll happen, trust me). Because he has bad, old hearing, he probably won't even notice you hung up on him, so it's a win-win. You get to not talk to your dad and he gets to keep rambling about fundamentals, victimless.