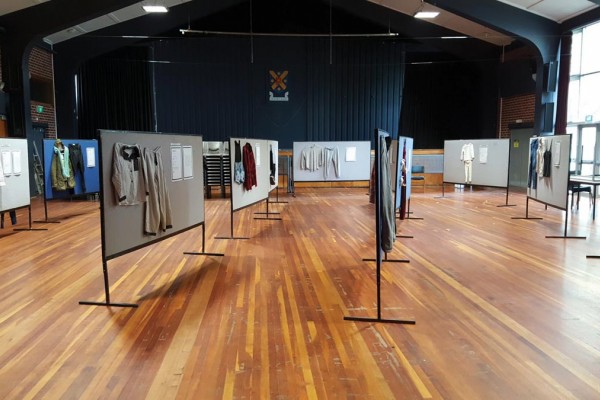 As part of Rape Awareness Week, Union Hall turned into an exhibition of clothing of survivors of rape and sexual assault.

The Students Against Sexual Violence (SASV) “What I Was Wearing Exhibition” sought to disrupt the myth that sexual violence is perpetrated by “a strange man in a dark alleyway,” said organiser Laura Cairns. The exhibition showed the broader picture of “how, why and when rape occurs, and [challenged] the idea that the clothing or alcohol consumption of victims can somehow cause sexual violence”.

Clothes donated by survivors  included ball gowns, bum pants, puffer jackets and pyjamas. The age of victims ranged from four to thirty years old. Assaults and rape occurred with and without alcohol or drugs and were perpetrated by both strangers and people close to victims. Very few perpetrators had been brought to justice via the judicial system.

Many displays involved people “harmed in intimate partner violence”. One survivor’s testimony stressed that being in a relationship doesn’t automatically grant consent.

Cairns says “the whole point of Rape Awareness Week” and this event was “to open up conversations around the realities of sexual violence and its impact.” She says she hopes “people will talk to their friends and family about what they saw and may start to notice harmful behaviours similar to” those described in the exhibition, and be able to “call them out, or re-evaluate and change their own behaviours”.

The event was also for “survivors [to be] reassured that nothing they personally did caused their assault, and that there is a community of people who can relate to their experience and pain,” says Cairns.

“This was the first time” many survivors had “shared their stories. Not every survivor or victim wants to become the public face of sexual violence prevention, but everyone wants change.” Cairns said many survivors found contributing to the exhibition “incredibly empowering”.

A volunteer told Critic SASV felt it was not enough to bring up bad experiences and leave them with people. Volunteers with mental health training were at every Rape Awareness Week event to engage in conversation.

One volunteer said they had many “mature” discussions with visitors to the exhibition. People from a “range of backgrounds” went through and “the response was really encouraging”.

“It feels like something’s different in the debate. Last year people made rape jokes when we handed out SASV leaflets.” This time there was “no backchat or wise-cracks when we advertised our events,” said the volunteer. “Obviously that’s an unscientific example, but I hope it signals a change in attitude.”

SASV is adamant rape awareness is not confined to a week. Laura Cairns says we will “continue these important conversations” and advocating for “best practice for survivors in all aspects of how assault is dealt with in the student community” and beyond.

SASV also highlighted the importance of legislative action by opening Rape Awareness Week with a speech from MP Jan Logie, the Parliamentary Under-Secretary to the Minister of Justice for Domestic and Sexual Violence.

One volunteer said SASV is proud of how Rape Awareness Week went. Sexual violence and rape are “so tough to talk about”. But “there’s real hope”. People don’t have to go away burdened “with how scary and wrong sexual violence is because we can wipe out it. Change is within our control.”

If you or anyone you know has been affected by sexual violence, support is available: