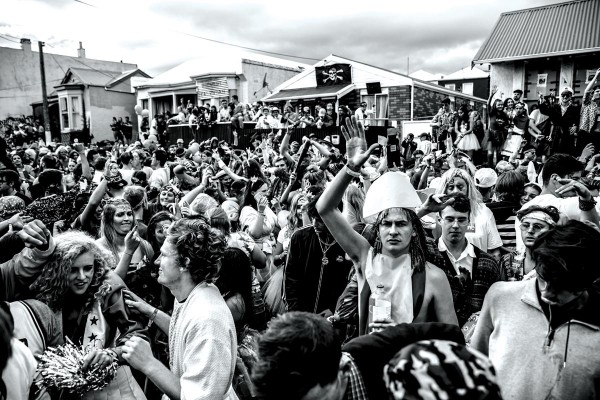 Editorial: Hyde Street 2018 was boring. And that’s exactly how it should be. I don’t mean it was boring for the attendees; the crowds we saw there were having an absolute frother of a time (at least until the rain hit). But media were well and truly disappointed.

In the six years since The Great Roof Collapse of 2011, OUSA has done such a good job of running it that none of the national media seem to care anymore.  Despite pretty much everyone receiving invites to attend, only the ODT and Stuff’s Dunedin reporter Hamish McNeilly actually showed up. Newshub sent a camera guy to get some footage, but no reporter, and TVNZ didn’t bother at all.

Media are only allowed in until 9:30 before they’re told to piss off so everyone can build a proper head of steam – with the exception of Critic of course, because we don’t conform to everyone else’s “rules”. Our reporters just run around with boxes of Purple Goanna under their arms and write down everything they can remember the next day. Because we’re professionals.

There was so little scandal that the ODT was forced to run positive headlines about a student party, something that is known to cause them physical pain. Their first article, “Thousands out to party in Hyde St,” basically just quoted the OUSA President, and their second, in the late afternoon, was titled “Hyde Street Part well-behaved”.

Newshub ran a stock standard story with the headline “Fewer arrests at Hyde St student party in Dunedin” which basically amounted to how the party used to be bad but is now good.

Stuff got the juiciest angle of the weekend by focusing on the controversial costumes and themes, but at the end of the day if all they can get students on is the non-PC angle, that’s not a biggie.

Two years ago, it was great news for OUSA that Kendrick Lamar playing at Auckland City Limits overshadowed the party. This year there was nothing else on, but the whole thing just went so smoothly that no one cared.

OUSA nailed this one.