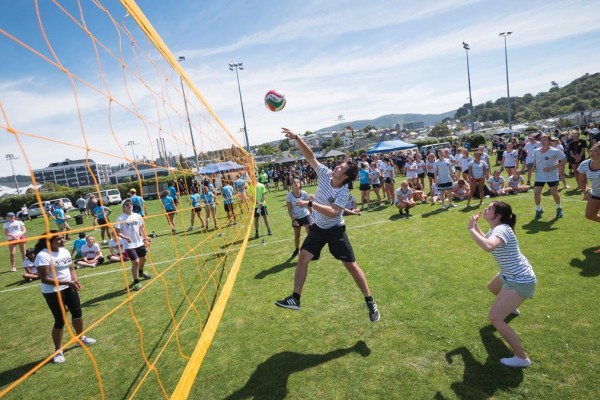 The season kicked off last Saturday for the turgid, semi-competitive shambles that is the inter-college sports league. Critic did not send a reporter down to watch any of the games, because if we wanted to watch a whole lot of sweaty freshers yell and bump into each other, we’d just go to Starters at 9:30 on a Thursday.

Despite not seeing any of the games, we did manage to get our hands on the results and the team names, so we’re just going to randomly speculate about what happened.

The day kicked off with the men’s recreational football, as the atrociously named Selwyn College “She was only XI” (what the fuck Selwyn) notched up a victory over a rag-tag group of Te Rangi Hiroa kids. Selwyn struggled to keep up with the speed of the TRH team, mostly because they were so busy doing smug rich-people smiles and laughing at their own team name which they all thought was hilarious and repeatedly patting themselves on the back for thinking of.

The Hayward Hornets and Toroa FC tussled to a draw. There were a plethora of scoring opportunities in the last 10 minutes, but the strikers failed to capitalise because both teams got too puffed and all sat down.

Overall, the games themselves were largely uninteresting affairs, but everyone really just wanted to see who could come up with the best team name.

The aforementioned Selwyn Paedophiles easily took out worst name, and everyone unanimously agreed that they were bad people who should be banned from everything.

Carrington women’s football came through with “Let’s get Messi,” while the Selwyn girls proved surprisingly self-aware, naming both their netball and football teams “The Cult”.

Volleyball clearly attracted the more creative freshers, with names including “How I Set Your Mother,” “Notorious D.I.G.,” “Spike Tyson,” and “Sets in the City”.

Selwyn stuck with their traditional rugby name “DKDs,” which does not stand for anything, but kinda sounds like “Dickheads” if you say it phonetically.

Cumby was overwhelmingly boring and uninspired, with their football teams called “Scorers,” and “Shoots” and their netball teams called “Shooters,” “Nets,” and “Goals”. Other options for their ‘things that are on a court’ category of team names included “Balls”, “Lines”, “Posts” and “That one fresher guy who always takes it way too seriously.”

But in the end the naming award had to go St Margaret’s College, who entered just one team in the recreational volleyball league, yet still gave it the name “St Margaret’s 2”.