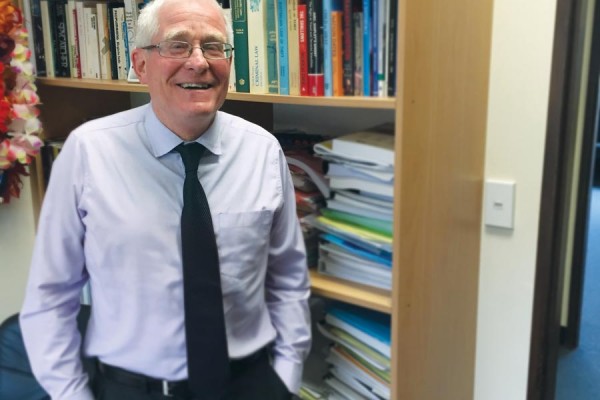 Tributes have poured in from current and former Otago University Law Students following Mark Henaghan stepping down as Dean of the Otago Faculty of Law.

A Facebook group, “Seeking Mark Henaghan Tributes” was created on April 6 by former students Andrew Row and Harriet Enright, and within four days the group had over 1300 members and 100 tributes.

“The tributes are a testament to the many people he has personally helped. We just wanted a forum where people could share that,” said Andrew. Harriet is planning on compiling every submission the group receives, both publicly and privately, into a book which will be presented to Mark when he leaves. “It’s not for public circulation, with just one copy to give to Mark. It’s our way of a ‘thank you’ card, but with thousands of people, that card turned into a book.”

“I’m not overstating things when I say you were truly a beacon of humanity in a profession (academic or otherwise) that often feels devoid of the same. You will be dearly missed, but the legacy you leave is significant, and will endure.”

“I will never forget one very long Tuesday, when I’d ended up having to bring both my children to a (compulsory!) Criminal Procedure tutorial, after 5pm. You saw me struggling; cajoling them in the corridor. You pulled me aside, and told me that you would take care of them while I attended the tutorial. They stayed and played with you that whole hour, so happily. This epitomises the Dean you are.”

“I want to thank you for all your support during the difficult times when my father passed away in my 2nd year. I remember he told me he had fond memories of you and his 1 year at Otago Law in the ‘80s during his postgrad.”

“I’ll never forget sitting in your family law lecture on September 12th 2001. The dreadful 9/11 attacks in the US had just happened and we were all shell shocked. Also, our family files were due that week! You allowed and encouraged us all to stop, reflect and grieve. You made space for peace and silence in what felt like a new and terrifying world. This is just one small example of your pastoral care for your students.”

“While I was taking Family Law I was affected by clinical depression that made me struggle to complete my family file. When I met with Mark he was only concerned that I had participated to help my group partner (I had) to complete the group part of the exercise. Mark was re-assuring and kind about my own inability to complete my file that was considered plussage in the way the course was graded and just encouraged me to get better and keep on with it. His attitude and reassurance meant a great deal to me at the time.”

“I gave birth to a full term dead baby on 24th of February 2017 - the first day of second year law lectures. Mark was of absolute support understanding and I did not come close to this level of support in some other areas of my life. I also received immense care and support through my pregnancy (2016), despite being unwell for a large chunk of my study including the exam period. Mark has been absolutely amazing support to me throughout my pregnancy and birth to the point that I cannot express in writing.

Later in 2017 a family member went through court for serious criminal charges which made study and life very stressful for me and once again Mark showed me incredible support."

“If I come across a tricky problem I often find myself asking ‘what would Mark Henaghan do?’”

Henaghan spent 41 years as a Law Professor at the University of Otago, and 19 as Dean. He taught a large portion of LAWS101, as well as LAWS311 (Family Law), which was his area of expertise.

He initially announced he would be resigning as Dean at the end of the year, but has now brought his resignation forward. Henaghan will stay on in the Law Faculty until the end of the year, whereupon he will be taking up a position at the University of Auckland Law School.