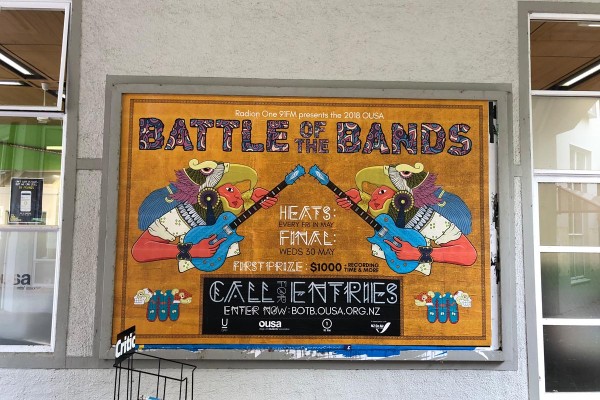 “What about freedom of speech?” says local racist

A promotional billboard for the OUSA Battle of the Bands event has been pulled after it sparked controversy for its use of a hodgepodge of cultural symbolism for a seemingly unrelated event.

The image shows a person in some sort of traditional headdress from an unspecified South American culture, depicted with red skin, holding an electric guitar.

OUSA received complaints from some of their own staff and one external person who took particular offense to cultural appropriation of the use of feathers in the headdress.

“Using the image of a nondescript native South American, in what is obviously traditional ritual attire, is just another case of a minority (who has nothing to do with NZ?!) being presented in a careless way for the benefit of something trivial,” said student Tess Jhompson.

“This is another case of white people taking something ‘pretty’ from a culture and robbing it of its meaning by calling it fashion and wearing it to simply ‘look good’. I think the Battle of the Bands poster is aesthetically pleasing. Kudos to the designer, you have amazing skills. It is eye catching and undoubtedly beautiful. But the content is problematic. How did this concept pass?”

Radio One, who is a naming sponsor of the event, said they are strongly considering pulling their support from this year’s Battle of the Bands unless changes are made to the promotional imagery.

In an email to staff, OUSA CEO Debbie Downs said she had made the decision to have the posters replaced, but will wait until after Easter for the sake of convenience. It’s undecided whether the posters will be adapted to remove the culturally insensitive imagery, or if they will simply re-use old imagery.