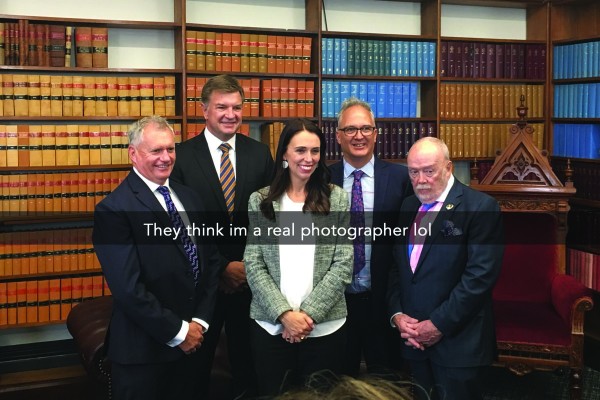 Critic often doesn’t get invited to important stuff. Mostly because we aren’t important and no one really likes us. So we decided to start inviting ourselves.

We had no idea that Jacinda Ardern was in town, reopening the Dunedin Law Courts and announcing Labour’s work-for-the-dole scheme, until it came up as a push notification on Facebook because Newshub was streaming it live.

Figuring there was no harm in trying, I jumped on my bike to hustle to the law courts. When I arrived the road was closed, and there were cops surrounding the entrance. I approached one of them and asked where the media entrance was, gesturing to the lanyard I was wearing.

It should be noted that this lanyard was by no means official (it was made for an O-Week concert in 2016) and was not even mine – the name and photo was of Isaac Yu, who is an Asian man, very unlike myself, a blonde, white man.

The cop looked me up and down and said “are you on the list?” I admitted that I was not. “Can’t go in if you’re not on the list. You can stand outside the door, but don’t get in the way.”

I immediately jogged around to the back entrance of the court. There were no police, but there was a rent-a-cop on the door. I walked straight in. He saw my lanyard and smiled “oh, you’re media? Sweet as, right through there”.

I followed a confusing set of hallways until I found a bunch of people in suits, and figured this must be the place to be. On the other side of a pair of double doors that said “No Entry,” Jacinda was walking upstairs accompanied by Andrew Little, David Clark and Claire Curran.

There was no one guarding the door except for an A4 piece of paper, so I figured it was more of a suggestion than a rule, and walked through and up the stairs. I was hoping I could barge my way into a press conference, but it turned out it was just a fancy tea and biscuits session.

I felt awkwardly underdressed, being the only person not wearing a suit. I felt naked except for my all-powerful lanyard. I kicked myself for not bringing a big fancy camera, they always make you look important.

I milled around, sent a few awkward Snapchats of Jacinda, admired how good Andrew Little looks with his new beard, watched Mark Henaghan give people awkwardly sexual hugs, and ate a rice cracker with sundried tomato pesto and a piece of lemon syrup cake which was far too syrupy.

Then Jacinda lined up with four old men I didn’t recognise to take some photos. I pushed right up to the front, next to some bloke from Newshub, and started taking pictures on my phone despite having no idea what I was doing.

A secret service buff in a cliché suit and indoor sunglasses was looking at me suspiciously, perhaps having worked out that I was not the Asian man my press pass claimed I was.

I grabbed two fancy looking cookies for the road, and bailed. I had learnt nothing, achieved nothing, and possibly broken some minor laws. Exactly what Critic is all about.