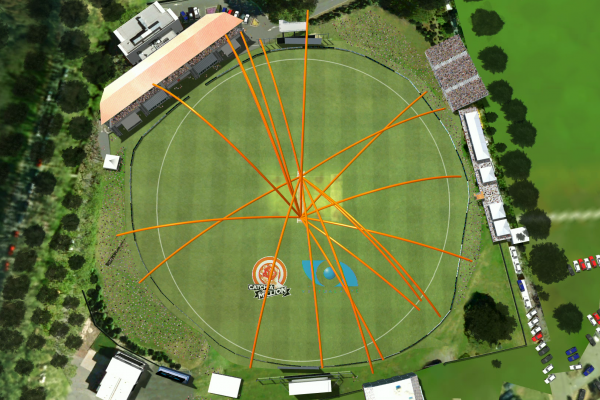 The majority of the embankment at the University of Otago Oval in Dunedin will be set aside as a “catch zone” for the iconic Tui Catch-a-Million promotion, with 30% set aside as a family zone where catches will not be eligible for prize money, according to Tui Brand manager Jonathan Rea.

Any fan who makes a clean one-handed catch while wearing a Tui Catch a Million T-Shirt will win $50,000, with a total of $1.15 million up for grabs over the course of the 23 limited overs international matches the Blackcaps are set to play this summer.

The promotion, which is being run for the third time after a two year hiatus, caused controversy after several children were hit by fans diving for catches at the Mt Maunganui T20.

Rea admits Tui was a bit unprepared for the hailstorm of sixes that rained down from Colin Munro as he put up his third international T20 century. “We hadn’t run Catch-a-Million in a T20 before, then the Blackcaps go off and hit our highest ever T20 total with 23 sixes. At the end of the day, making sure crowds are safe is our priority, and people that don’t want to participate don’t have to.”

The new policy of “catch zones” means that families with young children don’t have to worry about the dangers of punters diving into them. Despite the restriction, Rea says the rule change isn’t Tui attempting to decrease the likelihood of a catch being taken.

“We really want to give away the cash, as much as possible. Tui has always been a brand that looks after the boys, ever since 1889, and $50,000 will go a long way to making someone’s summer. ”

“People are surprised about how large the catch zone is. NZC set them up and we worked with them to get as much of the ground covered as possible.”

35,000 Tui shirts are being given away or sold over the course of the summer, and while no catches have been taken yet, Rea says he hopes there will be one soon. The first season the promotion was run two catches were taken, and 7 were grabbed in the 2014/15 summer.

Rea’s advice for anyone that reckons they’re in with a chance to win is “Get your area, and stay there. Of our winners, no one has ever won by running to it, they’ve all been hit to them. Steady your feet, stay there, and keep your eye on the ball”.