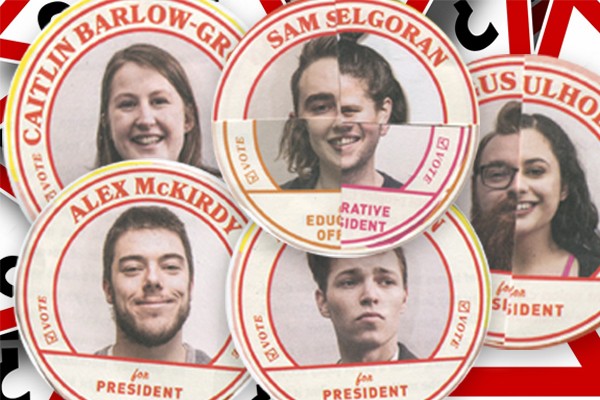 What Do the Presidential Candidates Actually Represent? These guys are a throwback to radical student activism of the 1980s. The lovechild of a last-minute union between socialists and feminists, they are peculiarly running two presidential candidates, Angus and Monique, because they didn’t actually form their ticket until after registration closed. Angus is a union man who wants to be marching on the clocktower and organizing strikes over staff cuts. “The only good protest is an illegal one,” he claims. Monique was thrust into running after she and Kyra Gillies wrote an extensive booklet claiming failures of OUSA and the university to combat sexual violence and properly support the Thursdays in Black campaign. Easily the most emotive of candidates running. Caitlin’s the only presidential candidate this year who has actual executive experience, but maintains her independence by refusing to affiliate with a ticket. Could pick up a lot of votes from students dissatisfied with how shit tickets have been in recent years. She’s been really effective as Recreation Officer and  is easily the most qualified candidate to run events such as O Week and Hyde Street. She came alive talking about PE school protests and the need to lobby central government through NZUSA. She’s extroverted as fuck; it’s easy to see her bouncing all over campus raising awareness for all sorts of issues. According to current President Hugh Baird, “it will be stupid if she doesn’t win” – but I don’t know if that’s an endorsement she will necessarily want. Despite their presidential candidate Finn Shewell being a new face, the brains of the operation is current exec member and VP candidate Bryn Jenkins. If they get elected have no doubt that he will be the one running the show. At the forums, Bryn faced constant accusations of inaction on sexual violence, mental health, and student advocacy in his two years on the exec. Every answer was an awkward defence of bureaucracy and stagnation, making excuses for not following through on advocacy promised throughout the year and in the referendums. The top of the ticket is undeniably professional, but they are passionless. Their key promise of a more unified executive through better internal planning and communication sounds like a promise made by a management consultant brought in to run an accounting firm, not that of strong candidates who want to run a student union. Lync is the first seeming fiscal conservative to run for President in a while. He wants to drastically cut costs by withdrawing from NZUSA and ditching support for the Rowing Club, and wants to end OUSA’s involvement in Hyde Street. He has strangely juxtaposed this with a blatant and poorly thought out election bribe in the form of ‘Free Food Friday’ (which he says is part of his plan to fight mental health). Just because he wears a suit doesn’t mean he knows what he’s talking about. Doesn’t really have any unique positions of his own; he is mostly in line with the other candidates. A little out of his depth for President, but a nice guy.

Be Bold: The Junior Labour Party Another ticket put together by OUSA puppet-master Jarred Griffiths (2016 Admin Vice-President). Griffiths has run the campaigns of the last three Presidents elected. Be Bold are essentially a Young Labour outfit rebranded with some spiffy blue T-Shirts sporting their ticket name. Undeniably impressive candidates, well-spoken and with a lot of passion, but nothing particularly unique – a rehash of previous campaigns, they essentially come from the same blood as the failed Real Change ticket.