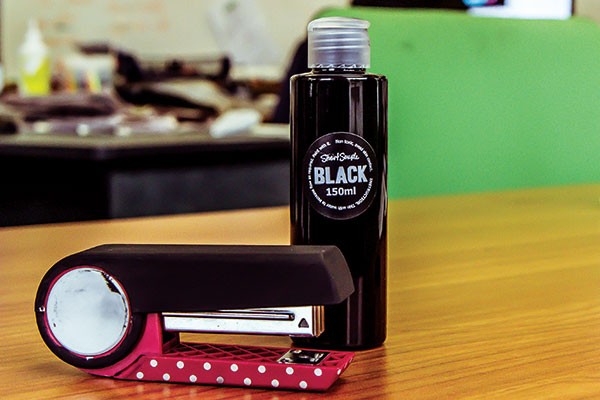 Second Blackest Black Paint in the World Not That Black

“It doesn’t even smell that nice”

Critic recently obtained a small bottle of “Stuart Semple Black”, which was meant to be a replica of the world’s black- est material, “Vantablack”, of which controversial artist Anish Kapoor has exclusive rights.

Vantablack absorbs about 99.6 percent of light, meaning that theoretically an object covered in it looks like a cut out silhouette rather than a three dimensional object, giving the illusion that you could “disappear into it,” according to Kapoor.

Artist Stuart Semple took umbrage with Kapoor’s monopoly of the material. He created Stuart Semple Black, a cherry-scented replica of Vantablack, along with pigments he called the “Pinkest Pink” and “Most Glittery Glitter”.

His pigments are available to everybody in the world, apart from Kapoor.

On purchase, buyers must promise that they are not Anish Kapoor, and that they will not share the paint with him. However, Kapoor got his hands on the Pinkest Pink and posted a picture of his middle finger dipped in the paint to his Instagram account with the caption “Up yours #pink”.

Since Kapoor already has Vantablack, which actually does cool stuff, it is unlikely he will want any of this.

The much-anticipated Stuart Semple Black arrived in the Critic office, but, though it is pretty black and matt, it does not make objects disappear into a silhouette. It just looks like matt black paint, and feels horrible to touch.

An office stapler (pictured) was painted with the Semple paint, but rather than disappearing into a tiny black hole, it just looks like a stapler with a black top-half.

Some of our ideas for the black paint included painting Executive Editor Joe Higham, then seeing if we could trick an exorcist into thinking he’s a ghost. However, due to the disappointing results of our office testing, we don’t think the exorcist would even get a decent fright.

“I thought it would look like a hole cut in the fabric of reality,” said an observer, “but I guess that’s not how reality works.”