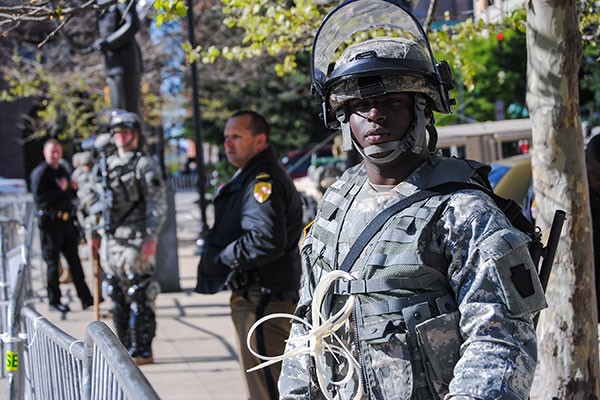 The United States city of Baltimore has declared a state of emergency in response to ongoing riots involving violent clashes, looting and arson. The riots began on 18 April after the death of Freddie Gray, an African American who passed away from injuries sustained during his arrest.

Gray, 25, was placed under arrest for allegedly carrying an illegal switchblade and died from spinal cord injuries after falling into a coma.

Cellphone footage of Gray’s arrest shows him being forcibly dragged into a police van while screaming that he was in pain. Police have said that Gray’s fatal spine injury occurred after this point, though this claim has been disputed by protesters.

It has been proven that the arresting officers forced Gray into a van with no seat belt and failed to provide him with necessary medical attention that could have saved his life. Gray’s death has been ruled a homicide, and the six officers involved in his arrest have been charged with murder and manslaughter.

After Gray’s funeral service on 28 April, protestors began throwing bottles and bricks at riot police. Shops were looted and vandalised, and police vehicles were set alight. Around 20 officers have been injured at the hands of citizens, and 250 people have been arrested.

Shortly before the attacks, Maryland Governor Larry Hogan declared a state of emergency. Over 5000 National Guard Troopers were sent to Baltimore “to protect the lives and property of citizens,” Hogan said in a press conference. Officers are using crowd-control methods such teargas grenades, rubber bullets and pepper balls.

The riots have led to Baltimore Mayor Stephanie Rawlings-Blake declaring a city-wide night curfew from 10pm to 5am. Rawlings-Blake said in a press conference she is “ profoundly disappointed” to see “the violence in our city”.

“I am at a loss for words,” said Rawlings-Blake. “It is idiotic to think that by destroying your city you’re going to make life better for anybody.”

At the same conference, Jason Downs, a representative of Gray’s family, said the city of Baltimore “[has] an opportunity in front of the entire world to show that we can break the cycle of violence”.

“We can be leaders, let us police ourselves. We cannot give the Baltimore police department any reason to respond to violence with more violence,” said Downs.

Keystone pharmacy was one of the hundreds of stores vandalised in the riots. The store’s owner, Dwayne Weaver, told the Baltimore Sun his “heart sank to the floor” when he found the pharmacy scattered in glass. Looters had emptied containers of medication as well as stealing various products.

“We saw how much we’d invested in the neighbourhood and how much the patients invested in us … for me as a business owner, I came back for the good patients. Those weren’t the ones vandalising the store.”

Riot damage is so far estimated at $9 million.