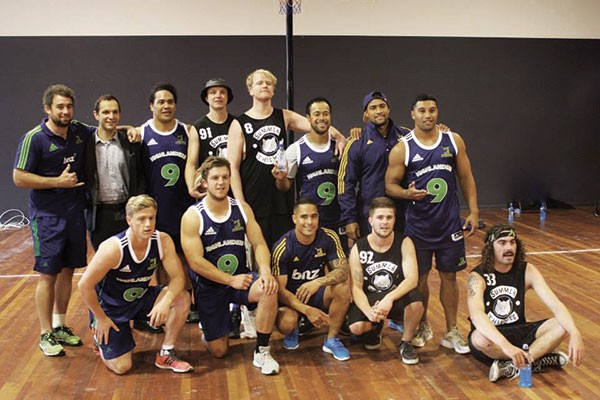 Last Friday, Adam, Angus, Johnny and Jake from local Dunedin band, the Summer Thieves, bravely challenged the Highlanders to a best-of-three-games miniseries of three-on-three half-court basketball in the Union Hall. It is not every day you can see world-class athletes being outclassed by a long-haired guitarist and a lanky drummer, but that is exactly what happened as the surprisingly impressive Summer Thieves came from behind to win the first game.

Unfortunately for the Summer Thieves, fitness became an issue for the bandmates as the Highlanders dominated the next two games, no doubt due in part to their superior conditioning and a deeper reserves bench that included Tom Franklin and the surprise, Buxton Popoali’i.

In the next two games, the Landers piled on the style and the points with Lima Sopoaga showing that his shooting game is just as good as his goal-kicking has been this season. Both the All Blacks and the Tall Blacks would be smart to give that man a call. Aaron Smith also entertained us with his chiselled calves and fancy footwork. Nothing short of what we expected from the world’s best halfback.

Joe Wheeler (Highlanders lock-forward) was just as good on the microphone as he is in the middle of the scrum and, although he wasn’t a great score-keeper, he provided plenty of entertaining colour commentary and choice tunes throughout the afternoon, spending most of the time complimenting his teammates’ “retro Nikes” and announcing whether or not they were single and/or registered Tinder users in between referring to the Thieves as “The Groupie”, “Bucket Head” and “Blond LeBron” amongst other borderline insults.

The man of the match goes to Summer Thieves vocalist, Jake, who got the nickname of the “Bondi Hipster” despite his obvious dislike of the blatant stereotyping. He inspired their first-game comeback and kept them in with a chance in the deciding game.

The game was clearly good training for the Highlanders as they went on to record a good win over the Blues the following night. A rematch challenge has already been issued by the Thieves, so if you missed this game, make sure you catch the next one!