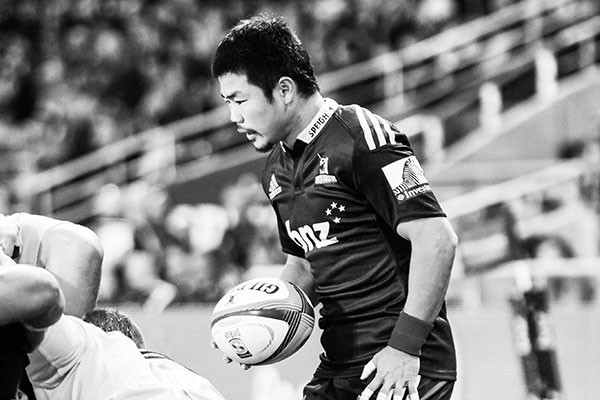 Afew days before the Highlanders’ game against the Blues, I put on a “business-casual” shirt, skipped a POLS class and ventured deep into the heart of the Highlanders’ “Worldwide Headquarters” (their words, not mine) next to the stadium, where I caught up with Highlanders halfback, Fumiaki Tanaka. Here’s how it went down.

Critic: So how’s everything going this week after the win over the Crusaders?

Fumiaki Tanaka: Feeling is good, but preparation is no different. We have a heavy training session later this afternoon then a captain’s run (light training) tomorrow before the game against the Blues on Saturday night.

Critic: This is your third season with the Highlanders — how have you enjoyed your time in Dunedin so far? How is the Japanese food here?

FT: It is good but I have struggled with the English. Some of the sushi places here are...ok.

(A diplomatic answer, but he is clearly not convinced by Dunedin’s culinary efforts.)

Critic: You were the first Japanese player to play Super Rugby — how did you end up signing for the Highlanders?

FT:  I played with Tony Brown at the Panasonic Wild Knights, and he was a big factor in getting me here to play. First I played for the Auckland U-19’s and then for Otago in the 2012 ITM Cup when Tony took over as coach. Jamie Joseph then offered me a place in the Highlanders squad for 2013.

Critic:  Away wins over the Crusaders and the Chiefs have given the Highlanders a good chance to make the playoffs again. What changes have you noticed over the three seasons you have been here?

FT:  My first season in 2013, we did not do so well (Highlanders finished 14th, winning just three games) but Jamie and Tony have built a solid group and we have gone up and up since then. Just through hard work, no magic tricks.

Critic: A lot of players recently announced they are heading overseas. You must be top of the list to join the Japanese team in the expanded Super Rugby format next season?

FT: I haven’t heard much about the new team, and I don’t know how it will work in its first season. I am hoping to sign a new contract soon and stay at the Highlanders for the next few years. For me, I think it is better to stay with an established team.

Critic: So will you play in the ITM Cup after this Super Rugby season finishes?

FT:  No, I don’t think so. I will take a break and prepare for the World Cup in England where I hope to be playing for the Japan national team! And then I hopefully will be able to play at the 2019 World Cup when it is hosted by my country. That would be a huge honour for me and my family.

(Fumi already has 44 caps for the Brave Blossoms so far, making him the most experienced international player in the Highlanders’ squad.)

Critic: Thanks for talking with Critic and good luck for the rest of the Super Rugby season and the World Cup.