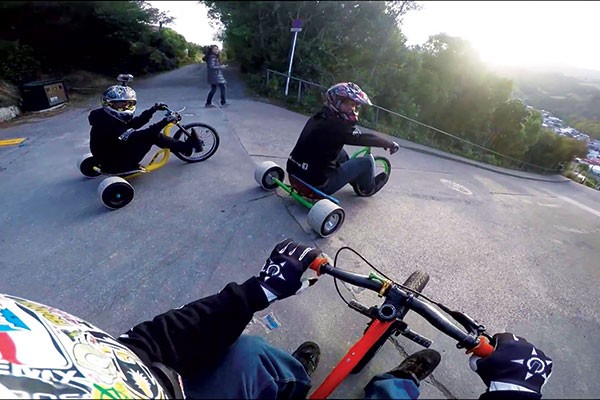 “We’d Hit It Again If We Had the Chance”

Three members of a Christchurch-based drift-triking community, SLIDE Christchurch, took on Baldwin Street as part of a stunt on Saturday 18 April. Harley Jolly (23), Tyson Bar (19) and Nic Roy (18) videoed the descent, which has since gained popularity on social media.

“Basically, we do this all the time as a hobby,” said Jolly. “On our adventures around Dunedin we just decided ‘we’ll hit that one’.” He said Baldwin Street is “not what you’d call a beginner’s hill, but we’d hit it again tomorrow if given the chance”.

The video has received nearly 720,000 views since it was uploaded on 19 April. Jolly said he didn’t expect the stunt to “go this far”.

Jolly says the public needs to realise that even though it has been hard to get recognition, drift-triking is a sport. Groups such as SLIDE Christchurch want the public to “accept the fact that [they’re] out there”.

“It will be our mission now to promote drift-triking in what’s hopefully a positive light for all to see,” said the group on its Facebook page. “[The video] may shine a bit of light on some of the boys here down south for potential sponsors. Let’s grow this sport!”

Baldwin Street, located in North East Valley, is recorded by the Guinness Book of Records as the steepest residential street in the world. In 2001, a nineteen-year-old student was killed after attempting to ride down Baldwin Street in a wheelie bin that collided with a parked trailer.

To ensure the safety of the drifters, Jolly said: “The Dunedin drift-triking boys ensured that the road was clear. There were people standing every ten to twenty metres making sure no cars reversed out of their driveways and that nobody just walked out.”

Drift trikes are tricycles designed for riding downhill on paved roads. They are purposely built with very little traction on their rear wheels and counter-steering for tackling corners, in order to produce the “drifting” motion. Although becoming increasingly popular worldwide, the sport originated here in New Zealand.