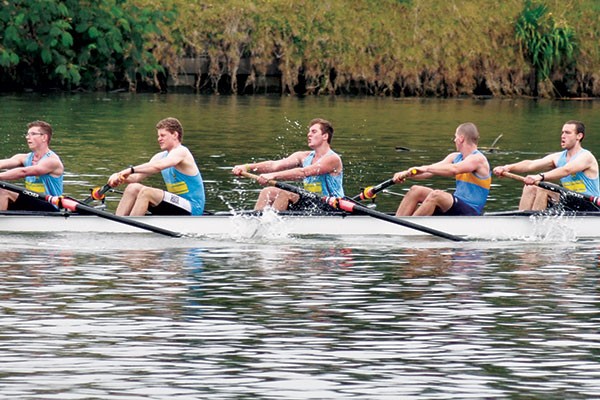 “Sixteen Years Has Certainly Never Been Done Before”

During the mid-semester break, the Otago University Rowing Club took out the Ashes trophy at the New Zealand Universities Rowing Championships in Whanganui.

The trophy holds the ashes of the former rowing club, which burnt down in 1999, and was won by Otago for the 16th year in a row. With a total of 162 points, the club finished with more than double the points of Waikato University, which placed second.

“Sixteen years has certainly never been done before,” said OURC Manager Glen Sinclair. “The big thing for the club is that we are not only winning the trophy, but, more often than not, winning by double the next team’s points and by more points than all of the other universities combined.”

The club took a team of 76 athletes, most of whom are students, and seven coaches to the three-day event. The Novice Men’s team won all three of their events, gaining 31 points. The Senior Women’s Eight, a new team after losing five athletes, won the Women’s Championship Eights race by 40 seconds. The Number Two team came in second place.

Sinclair said the club is “committed to the hard training”, which began in O-Week. The team trains from 5.45–7.30am, Monday to Thursday, as well as 7–11am on Saturdays. On top of this, senior rowers are required to lift weights three times a week in the late afternoon, as well as do two or three sessions on rowing machines. “All of the beginners and intermediates also do two or three rowing-machine sessions each week.”

Sinclair said “awesome facilities and equipment” play a key role in the success of the team, and “that has been hugely assisted by OUSA”. Great coaching is crucial: “Our coaches are really committed to what we want to achieve.”

OUSA Clubs Development Officer George McLenaghen attributed the success to the structure of the club: “It’s helped them immensely; I think there’s probably a fair bit of help from OUSA and the university as well.”