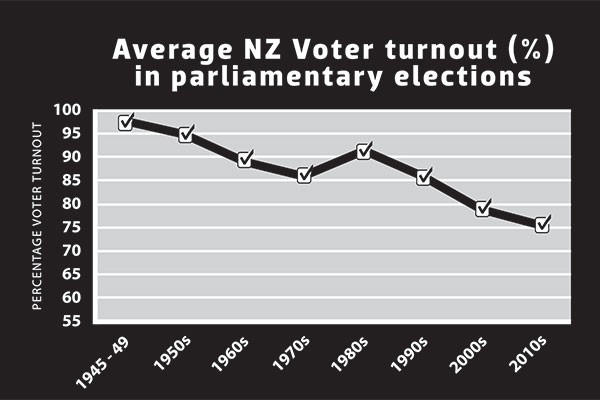 Commission to Focus on Turnout and Convenience

The Electoral Commission has released its 2014 election report. While the report highlights that the election was successful, it maintains that “much needs to be done”. The report outlines two major priorities to improve the electoral system.

The first priority is an increase in voter participation, which was at its second lowest in 2014 at 72.14 percent. This is a 3 percent increase from the lowest recorded voter turnout in 2011 at 69.57 percent.

The report highlights New Zealand’s “particularly steep and consistent” decline in voter participation over the past 30 years. New Zealand was a world leader in voter turnout in the 1980s; turnout has been declining each year since.

The poor turnout in 2011 led to a turning point for the Electoral Commission. Changes such as more public education on elections were implemented as a result of declining voter participation. A notable campaign, titled “Your vote is a powerful thing”, was launched, specifically targeting harder-to-reach audiences. Other forums, such as social media sites featuring informative videos on election information, were used.

The second major priority outlined is finding ways to meet voters’ changing needs and expectations. This alludes to a significant use of advance voting in 2014. Advance voting has steadily increased in each election by around 25 percent. The number of voters who voted in advance increased by 14.6 percent in 2014; this was 9 percent more than the commission anticipated.

Part of the increase was attributed to recommendations made by the commission to make advance voting more accessible. One recommendation made was to situate advance-voting stations in high-traffic areas such as shopping centres, libraries and community centres.

The number of advance-voting stations increased by 41 new locations from 2011. Advance voting at the University of Otago increased 300 percent from 2011, with 7802 votes being cast before election day. The commission has attributed the increase in advance voting to voter convenience.

The commission aims to improve enrolment and voting services in the hope of increasing voter turnout.