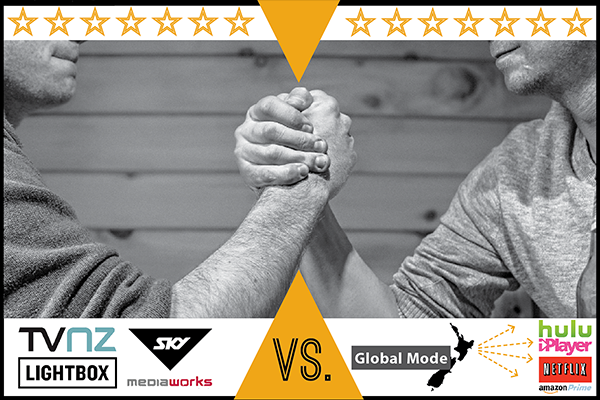 Global Mode Won’t Back Down to “Big Media Gang”

Four New Zealand television outlets, which together own 85 percent of New Zealand’s television viewing market, have joined together to take action on what they are calling a breach of copyright.

Global Mode is a geo-blocking service whereby the end-users can be made to look like they are in the boundaries of the website they are using. This gives New Zealand internet users access to content from offshore providers such as Hulu, Netflix US, Amazon Prime and BBC iplayer.

Slingshot announced that it would begin providing Global Mode to its users on 4 July 2014. General Manager Taryn Hamilton said at the time that Slingshot believed the time had come for New Zealanders to “have the same amazing choice of content that those in America and Europe have”.

“It’s time the content providers and rights holders got their act together and offer Kiwis the same content — for the same price — that people in other parts of the world have access to … Until they do, people will need to use a service like Global Mode to pay for top-quality online content, or continue to steal it.”

These rights holders, the four companies taking action, have outlined in a letter that overseas websites do not have the right to exploit the copyright works in New Zealand: “any licences they might have only apply to specific overseas jurisdictions”.

A spokesperson for the four companies said they pay “considerable amounts of money” for the rights to such content in New Zealand. Through the use of Global Mode, “these rights are being knowingly and illegally impinged”. The companies were unwilling to divulge how much they paid for such rights due to commercial sensitivity.

In a statement, Call Plus said that it, and its subsidiaries Slingshot, Orcon and Flip, “strongly believe that access to the internet via Global Mode is completely legal”.

Patrick Jordan-Smith, CEO and Technical Director of BNSL, also said the company checked the legality of Global Mode before it was launched. “Our lawyers’ advice was that it was equivalent to parallel importing and was completely lawful in New Zealand,” said Jordan-Smith.

A spokesperson for the four companies taking action has said that, based on their own legal advice, this is not the case.

“The laws allowing parallel importing are about importing physical objects and don’t apply to services. The difference between TV rights for international content and the parallel importing of physical products is that when someone buys a parallel imported product, they are not restricted on where they can use that product...overseas content services do have restrictions in place that link back to their rights agreements.”

The letter from lawyers representing the four companies required BNSL to confirm in writing by 15 April that it will cease to sell or provide Global Mode to ISPs. It also required that BNSL stop “representing in trade” that such geo-blocking measures are lawful.

On 13 April, two days before the deadline, Jordan-Smith said BNSL “won’t be shutting down the service”.

Critic obtained a copy of the reply letter sent from BNSL to the lawyers of the companies, which outlined that the original letter they received “doesn’t actually say why you think we are breaching copyright”.

“We have been providing the Global Mode facility for two years. In all that time, none of your Big Media Gang have ever written to us. We assumed they were OK with Global Mode … We did that on our understanding that geo-unblocking to allow people to digitally import content purchased overseas is perfectly legal. If you say this is not then we are going to need a lot more detail from you to understand why … Simply sending us a threatening letter, as frightening as that may be, does not get us there and is not a fair reason for us to shut down our whole business.”

According to a press release, three of BNSL’s customers have ceased offering Global Mode as a result of the threats. At the time Critic went to print, we were unable to confirm which companies these were.

Jordan-Smith said BNSL was not prepared for legal action. If it were to eventuate this way, it is “definitely a possibility” that BNSL would be forced to shut down.

Call Plus announced its sale to Australian company, M2 Group, on 14 April. M2’s Chief Executive Geoff Horth has said one of the first decisions to be made once the purchase is complete would be in regards to Global Mode action.