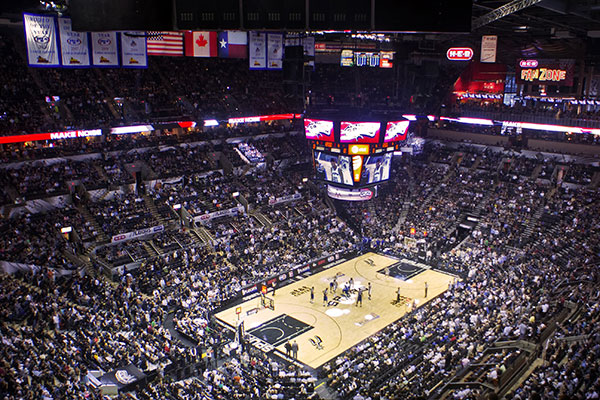 NBA Playoffs just around the Corner

While the NZ Breakers recently won their fourth ANBL championship in five years, the NBA post-season is just about to kick off next weekend after the monotony of the regular season concluded this week. For the casual viewer, the NBA can appear rather confusing so I will do my best to explain it (with some help from NBA.com).

The National Basketball Association consists of 30 teams split into the East and West conferences, which are then further divided into three divisions. (East = Central, Atlantic and South-East. West = Pacific, North-West and South-West.) Each team plays 82 games and faces the four other teams in their own division four times (16 games).They play six of the teams from the other two divisions in their conference four times (24 games) and the remaining four teams three times (12 games). They also play all 15 teams in the other conference both home and away (30 games). After the regular season, the top eight sides from the two conferences battle through three best-of-seven knockout rounds until one team from each conference makes it to the NBA finals, which is another best-of-seven series to decide the champion. You got that? Me neither...

This year has seen some serious questions raised about the fairness of the qualifying system as three teams from the Eastern conference (the Celtics, Nets and Bucks) are likely to come into the playoffs with a losing record over the regular season. Seems strange to reward teams that spend the majority of their season losing. The system is likely to change from the top eight sides from the East and West conferences qualifying for the post-season to the top 16 teams qualifying, regardless of their conference or division.

This season has seen some real changes in fortune for some of the heavyweights and perennial underdogs of basketball. Defending champions, the San Antonio Spurs, have been solid but unspectacular and are no doubt keeping some gas in the tank for the long playoff series.

The big kiwi from Rotorua, Steven Adams, and his Oklahoma City Thunder, haven’t had the best season after the relative success of the previous few years. They haven’t quite booked their playoffs spot as I write this, but it would be a surprise for them to miss out even with their poor recent form taken into account.

Kobe Bryant and the LA Lakers, who dominated the 2000s, have had another awful season, finishing bottom of the Pacific division again, which means that the Clippers are officially the best team in Los Angeles.

Down in Miami and the Heat have cooled off since LeBron James headed back to Cleveland where he has got the Cavs back into the playoffs for the first time since 2010 (before he left for the Heat), making four straight finals appearances and two championship wins. It would be a great story if he could return to the team he left in such controversy that people burnt their shirts bearing his name and lead them back to the finals. I fear that this would only inflate his already big ego to Kanye West-type levels.

At this point I am not confident enough to predict who will make it to the NBA Finals so...may the best team win. Whatever happens, we will bring you an update of the first knockout rounds in a few weeks’ time.

Highlanders vs. Blues – Round 10 Preview

A must-win game for both teams but for different reasons. While the Blues’ season is effectively over already, they will be desperate to get some more points on the board, for pride’s sake if nothing else. John Kirwan knows his head will remain on the chopping block if he doesn’t turn things around soon, and some of the players may be seeing their World Cup dreams disappearing due to their poor performances. Promising youngsters Charles Piutau and Francis Saili have both read the writing on the wall and signed up to play in Ireland at the end of the season. If a few more key players jump ship, then the Blues could lurch from a panic to a full-blown crisis and a dreaded “rebuilding phase”.

For the Highlanders, it is an opportunity to cement their place in the top six. With the Crusaders playing the Chiefs and the Hurricanes taking on the defending champion Waratahs this round, now is a good time for the Highla nders to kick on towards the finals, especially with a difficult three-game tour of South Africa and Australia coming up. Another motivating factor for the Landers will be not wanting to be the first team to lose to the Blues!
This article first appeared in Issue 7, 2015.
Posted 2:51pm Sunday 12th April 2015 by Daniel Lormans.