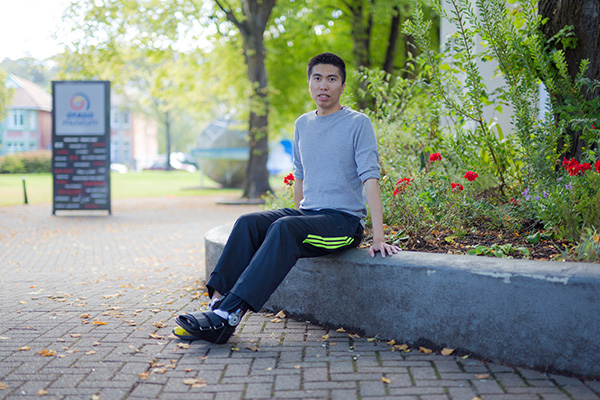 An Interview with David Xie

Founder of Humans of Otago

Facebook pages ‘Humans of [insert city here]” have grown tremendously in popularity during the past year. The original, Humans of New York, now has 12.4 million likes. David Xie, a University of Otago IT administrator, decided to create a page for those living right here in Dunedin, and the page has gained 6,900 likes. What inspired you to start Humans of Otago? I quite liked [Humans of New York] previously, but I never thought I could do it because just asking and talking to strangers is just hard enough. Taking photographs is actually taking it to the next step, and then asking those questions, the more personal questions, that is the last thing that I was prepared to do. I originally didn’t think I could do it. How do you choose your subjects? Normally I choose people who look, I guess, different from the crowd. I especially like people who are wearing bright clothes or have tattoos and are not afraid, I guess, to stand out. Someone who, let’s say if you smile at them, he or she will smile back at you, rather than just walking past pretty quickly and that kind of thing. What is your favourite aspect of this work? My favourite aspect is actually getting the story at the end of the day. Sometimes their answer will surprise you. Literally anyone on the street can give you an answer that you would never have thought of. That’s the part I like about it, just the surprise and twists of stories, the things that people have gone through and that kind of thing. Are there any interesting experiences you’ve had while talking to and photographing people? Two people that I’ve interviewed, I think they were friends, were sitting on the lawn just outside the museum. The female subject wasn’t very open and wasn’t very keen to talk. The male subject was okay but then later on he put it on Facebook saying that she, I think it was his boss or something, didn’t know what was happening and thought I was a cult leader. And I thought “that’s bit strange,” and she went back to her place and then discovered that actually it is kind of, like, I think in his original words, a “cheesy copy of [the] Humans of New York” book, which was just lying on her table. How has hearing all these different stories and meeting so many different people affected you and aspects in your life? Respect people’s opinions and the choices that they make. We always want to jump to the conclusion. Let’s say I see someone walking down the street with tattoos all over them, I’ll probably think she must be a gang member or she might be hanging out with the wrong type of people, and that’s why she’s got that tattoo or that’s why they’ve dyed their hair this way or are doing that. Sometimes it might not be that way. And sometimes you think you’re in quite a bad situation. For example, I’ve ruptured my Achilles and can’t really walk. Yet I see Josh, who is working with Stopping Violence Dunedin, the latest interview that I did about three or four weeks ago. I mean, he can’t walk and he has to have someone feeding him his food. So when I compare myself to him, my ruptured Achilles is nothing really. He’s been helping Stopping Violence Dunedin as a Marketing Campaign Manager, so he’s been doing great things. Also, he’s at work as well. Sometimes when I compare my problems to someone else’s I can see that mine aren’t really that bad. Things like that. And sometimes other people’s answers could lighten up my day as well. What do you hope people can take from all the different stories and life experiences that are shared through Humans of Otago? Personally, I would hope that they can see that we are not that different from one another. We might have a different skin colour, be a different age, every one of us is very different, but I guess deep down we all have happy moments, sad moments, struggles just like everyone else. It doesn’t matter where you’re from or how high or how low you are in society, we all have good times and bad times. So that’s, I guess, something that I hope someone can take away just by reading the stories.