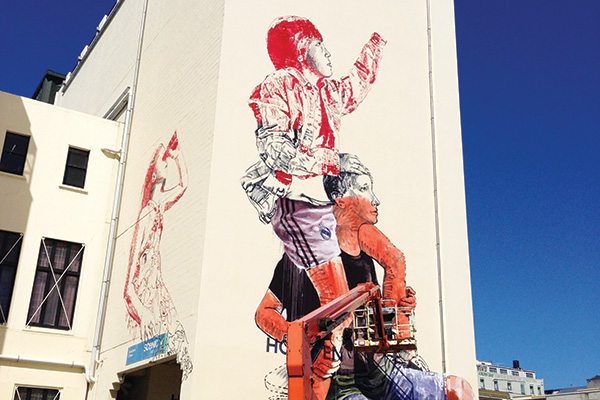 A s part of a project by the Dunedin Street Art group, Australian artist Fintan Magee has begun a new mural on Rattray Street. The mural, which spans from three to four storeys, is one of three projects in the area and is located on the side of the Scenic Hotel building. It is set to take a week to complete.

“People come every day to watch the progress of the art … you can see the smiles on their faces, the happiness that the art brings.” The group’s spokesperson, Glen Hazelton, said that members of the public have stopped to see Magee at work, with individuals often returning several times.

The second aspect of the project is set to be a piece that will be replaced on a monthly cycle, titled “Changing Wall”. The third will be a collaboration between Dunedin Street Art and Stickum, an artist’s co-operative.

The mural comes as part of a Street Art Trail, which involves a 60-minute walk of all the murals they have created in North Dunedin. Hazelton said, “Street art has artistic value … It is something that just can’t be lumped in the same category as graffiti.”

“There will always be something that is taking away from the roots of how it began, something that seems cutting edge and brings a new vibe … The artwork makes you look at the world differently; it makes you more aware of the world around you,” said Hazelton.

According to White, the group has been contacted by numerous building owners in Dunedin who are “offering up their wall space … There’s a lot of empty walls in Dunedin … we need a bit of vibrancy.” White said the artwork “gives locals a sense of pride for Dunedin.”

The group, led by Hazelton and Justin Cashell, is run entirely by volunteers. Funding for the art comes from donations.

Magee, who has been described by the Daily Telegraph as Australia’s version of Banksy, is known for murals throughout Queensland and New South Wales. His mural depicting Felix Baumgartner in Brisbane has gained him recognition worldwide.
This article first appeared in Issue 4, 2015.
Posted 2:32pm Sunday 15th March 2015 by Zahra Shahtahmasebi.