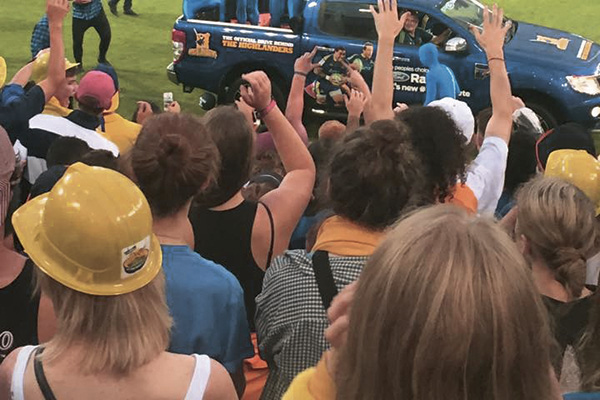 Critic’s Night at the Rugby!

A Diary of a Night in the Zoo

7:00pm: I decide I can’t afford stadium-priced beer so I knock back a few leftover Cindys as I wait for my friends to show up. Their lack of punctuality is noted for the future.

KICKOFF: A huge roar from the crowd as the Highlanders’ season gets underway. Unfortunately, we are still five minutes away from the stadium getting absolutely drenched. “Don’t You Go Out in the Rain” by Dragon is pumping through the speakers as we arrive. The irony is almost too much.

7:40pm: We find some seats high up in the middle of the packed Zoo. A young lady asks if we can move back a row as her friends are on the way and one has a broken leg. Sounds legit.

7:45pm: On the field a bit of biffo breaks out as Crusaders prop Owen Franks goes crazy and starts swinging punches everywhere. Highlanders pile in and the crowd is loving it.

7:47pm: Richie fumbles close to the line so a scrum packs down. I do my best to offer a crash course in the laws of the game to the confused group of Chinese Health-Sci students standing beside us.

7:54pm: Aaron Smith scores for the Highlanders! He skins his All Blacks skipper with a dummy and a right-foot step to bust through from close range. Sopoaga converts and we start to believe.

7:58pm: A penalty goes against the Highlanders and Colin Slade lines up the shot amid a torrent of abuse from the Zoo. He thumps his penalty kick off the post and we serenade him with a lovely rendition of “You fucked up, you fucked up!”

8:01pm: Some douchebag lock called Scott Barrett barges over and scores an ugly try for the Crusaders. The Zoo voices its disapproval.

8:05pm: Sopoaga makes a break and it’s a try to the Highlanders! The Zoo goes crazy. Wait. What? The video ref has ruled a forward pass. No try! I claim to remember the good old days when the TMO couldn’t rule out a try due to a forward pass.

8:15pm: The Highlanders soak up plenty of pressure, defending on their own line, but some other douchebag scores after the halftime hooter has sounded. Who the hell is this Johnny McNicholl?

HALFTIME: The Crusaders enjoy an undeserved 20–7 lead. The Health-Sci team beside me asks about “the halftime show”. I inform them that Beyoncé will not be making an appearance. Instead, the T-shirt cannon begins firing sponsor merchandise into the crowd at a high velocity that reminds me of the Simpsons episode where Maude Flanders met her demise at the hands of a similar weapon.

8:25pm: Second half is under way.
I cringe as “Wagon Wheel” is cranked up again. Why does everyone love it?

8:32pm: Slade lines up another penalty kick. “He won’t get it, he won’t get it” we start chanting. And he doesn’t! Hitting the woodwork again. Richie decides to call it a day and is substituted. A muted applause ensues. Looks like he has one eye on the World Cup already.

8:39pm: Battle of the fullbacks now as Smith and Dagg exchange several kicks. This prompts an explanation of territory and tactics to the Health-Sci crew.

8:46pm: Try time! Malakai Fekitoa sells a dummy, drops a shoulder and runs in between the posts and scores right in front of the Zoo. A black and red plastic pitchfork is launched in protest from a pocket of angry Crusaders fans but this goes unpunished.

8:53pm: There is a break in play so “Uptown Funk” starts blasting out of the speakers and everyone goes nuts. Don’t believe me? Just watch the replay.

9:02pm: Sopoaga misses a crucial penalty from 50 metres out. Cue a collective hands-on-heads reaction from the Zoo.
He makes amends a few moments later, slotting another goal to get back within seven points.

9:12pm: Slade scores another penalty goal to put the Crusaders nine points ahead with only two minutes left. The ball has barely hit the ground when the mass exodus of disappointed Highlanders fans starts. A girl in a red and black dress celebrates a little too aggressively and nearly slips off her seat in front of us.

FULLTIME: Sopoaga scores a penalty with the last kick of the game to clinch a deserved bonus point for the Highlanders but the Crusaders have held on to win 26–20. At least it is not raining on the walk back home where I drown my sorrows with the rest of the Cindys and half a bottle of cheap blackcurrant liqueur before heading into town … following a few thousand other students who do the same.
This article first appeared in Issue 2, 2015.
Posted 6:26pm Sunday 1st March 2015 by Daniel Lormans.