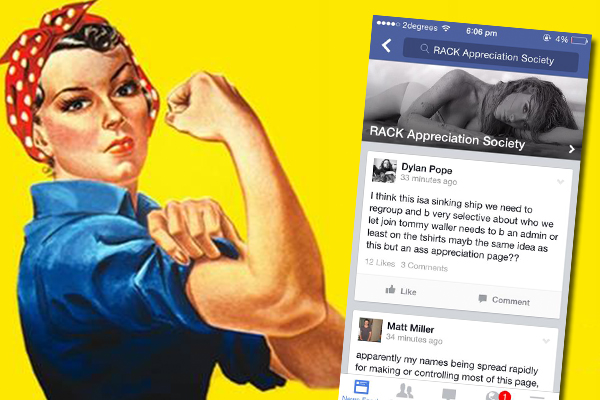 “They don't want consent, they get off on the violation of privacy”

On Tuesday 7 October 2014, a group called “Rack Appreciation Society Awareness” was created on Facebook. 24 hours later, over 2,000 women were members of the page.

The group was formed out of disgust at the “Rack Appreciation Society” – a Facebook group formed two weeks ago, with over 4,000 members, most of whom are local Dunedin males. After a week of being online, members of the group began posting private nude photos of young Dunedin women and commenting with derogatory statements. Many of the 100-plus photos were Snapchats that had been screenshot. Critic notes some of the photos even have captions, proving they were intended for private viewing including “show anyone and I’ll kill you.”

The page follows on from the recent media storm surrounding the "Skank Central Chch Name and Shame" Facebook page, and the invasion of celebrities’ private photos. Critic spoke to several students who had been either victimised by the page; actively used the page; and those who had been “unknowingly” added to the page.

Eva Ovens, one of the founders of the Awareness page, said she started it to draw attention to the “large population of the male community in Dunedin [who] are participating in this degrading and horrific act. The disgusting language, comments, photos and videos uploaded by these Dunedin men are absolutely horrifying.”

A student whose pictures were used on the page, said “It makes your heart sink that everyone and anyone can see these photos and choose to do whatever they like with them.” She adds that the individual who shared her photo “should be a father role-model so it’s really disappointing.” He has a young daughter.

According to the founder of the Rack Appreciation Society group, Sean McDonald, the page was formed “for the soul [sic] purpose of sharing photos already available on the Internet with each other.” The description of the Facebook group was that it was “a place of tranquility where people alike are able to share and discuss the wonders of the Rack … This is not a disrespectful page nor is it a place of contempt; we are better than that. Consider us more of a cigar and whiskey kind of page to ponder on the finer things in life.”

McDonald said he attempted to shut the page down “immediately,” once he saw how out of control it had gotten, with the adding of local students’ photos.

“After one person posted a degrading picture it triggered a domino effect and then everyone was just posting what they wanted instead of being respectful.”

The University of Otago Proctor Simon Thompson is unsure how a Rack Appreciation page was ever going to be a respectful place. “What did he think would happen?”

McDonald continued, “95 per cent of members had no idea who the photos belonged to. For all we know they could of just been pictures off the Internet which is what I assumed the majority of them to be.”

However, another student approached Critic and said that amongst her group of friends, many of whom were some of the first 200 members, they were “well aware of the intention of the page – to show off photos of girlfriends and ex-girlfriends.”

The Awareness page contained stories of girls who had been talked about on the Society’s group. By the time it had attracted outrage from the 2,000 students on the Rack Appreciation Awareness page, female students began private messaging members of the original page, accusing them of demeaning behaviour even if there was no evidence of their input on the page. “Just being a member is encouraging the ones who are posting to keep going,” Emma Thompson argues. “Neutrality helps the oppressor."

Despite being a group exclusively of women, Ashlyn Monk on the Awareness page said “this is not to become something the boys responsible can turn around and use on us. We want no heated arguments with the guilty counter parts, no abusing them and calling them names, and no signalling out individuals from their group and making fun of them on our secret group … This group is about banding together and making a stand.”

Individuals were named, however, particularly when influential people were noticed to be members of the group - including members of the Otago Super 15 Rugby Club and OUSA’s Administrative Vice President Ryan Edgar.

Edgar, who received backlash as soon as women on the Awareness page discovered he was a member, responded on the page that “your naming and shaming approach is about as shameful as the [Appreciation] page itself. I agree with almost every point made by those condemning the page, but anyone could be added to the page without their consent and as such the approach that has been taken is like issuing a guilty verdict without a trial.”

His defence was shared by many - that the Facebook group allows members to add other users without them having to give permission to join the group; instead they are automatically made a member. This removes the chance for people to choose whether to be a part of a group or not. He says that a lot of men have approached him expressing how unfair the allegations are. He continued in his personal capacity saying, “When I saw that I’d been added to the page I assumed it was nothing more than a page about racks. I'm happy to put my hand up and state that I've got no problem with the appreciation of images that have been shared with consent. Once I became aware of the nature of the page, I left it.”

Critic attempted to get responses from students who were also members of the page, with few of the responses giving much promise. One young man said “a few girls ranting about the boys objectifying them have been seen in wet t-shirt comps in the past.”

Another added, “If they don’t like the idea of being objectified then they shouldn't first objectify themselves, and put themselves out there flaunting in front of crowds of men.” The general consensus from ex-members of the page was that “this has been blown way out of proportion.”

Matt Miller, who was singled out as a regular contributor to the page, said “I’m just a young idiot getting too involved in something like this; the rest of the fellas would say the same.” Michael Hastie added, “the lads have done all they can; it's up to the girls to get over it now.”

An OUSA spokesperson responded “the Executive have been approached with concerns from members of both pages. No victims who have had their images shared have approached OUSA … Any University of Otago students that have posted to the page may face repercussions from the Proctor or the NZ Police.”

The University of Otago’s Proctor Simon Thompson said, “it’s dumb all round.” In regards to repercussions for students involved with the page, he says “It breaches the ethical policy, that you need to treat every other member of the University with respect. It’s harassing others.” He said that once he has a list of names, “I will have them in here and get an explanation.” Thompson advises that starting pages like this is not wise, “when applying for jobs, this sort of history will show up in future.”

Inspector Mel Aitken, Acting Area Commander Dunedin Clutha Waitaki, said "While not necessarily unlawful, such social media pages can open up young people to unwanted, upsetting and inappropriate attention online. Police will act on matters which are unlawful … In general terms, anyone using social media should be very cautious about the personal information and images they share."

Critic notes that we clarified to the Police that the images shared were not consensual and were not posted on social media by the women.

"It depends on the content of the photograph and circumstances as to whether the imagery is objectionable or not … Images or information sent to a seemingly trustworthy associate or posted on a social media site can easily, simply and quickly be republished to a wider audience," Aitken added.

Kate Buchanan, a University of Otago student, posted on the Awareness page “The worst part is that this isn't about sex, or about getting off over these photos. They have porn ... All with beautiful women who are giving their consent for these images to be looked at and shared. But they don't want consent, they get off on the violation of privacy … I hope all the girls who have been victimised by that page know that it isn't your fault - you are entitled to take as many goddamn nudes as you want, and not have them distributed to anyone other than who you consented to see them. Fuck that page, everyone in it, and the society that created them.”

Hester Philip, another student, addresses the fact the page has now been portrayed as an issue between the genders, with several comments being made against local guys on the Awareness page. She said, “There should be less talk about individuals and more about why it happened. How some people in society think that it is okay to share stuff like that with everyone, when it is something that was an intimate thing between two people. It's not a feminism thing, it's having respect for other human beings, and knowing right from wrong … It would be just as bad if it was boys that had been posted on a page.”

OUSA added, “We have a number of people approach us who have been added to these groups without their consent and have therefore had backlash even when they have left the group straight away. This has resulted in some people’s reputations being unfairly tarnished and has also affected several relationships.

“The underlying issue of female objectification is a serious issue and cannot be ignored, but we also reject the notion that all males involved in this are sexual predators.”

The Dunedin Feminist Group, lecturers and individuals are preparing letters of complaint to the University.
Posted 6:08pm Wednesday 8th October 2014 by Josie Cochrane.