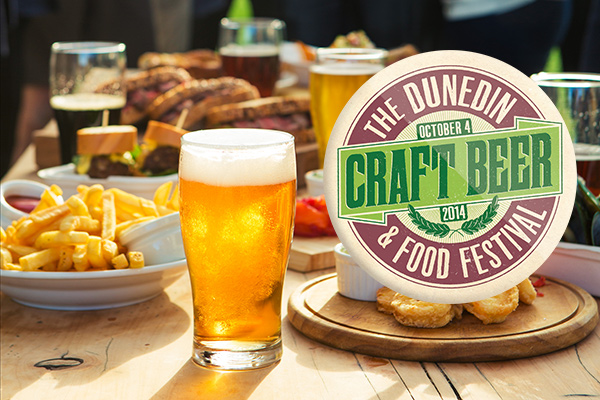 This Saturday 4 October welcomes back the Dunedin Craft Beer and Food Festival, organised by OUSA. Bridging town and gown, there’s something for everyone – the average Scarfie can (oddly) have their usual Speight’s and drink it too, while the more discerning palate can opt for something a bit more, well, crafty. It may not surprise readers that the team at Critic isn’t overly fond of the usual piss found in Scarfieville and we have thus experimented with a wide variety of hops. Here are our selections ...

Not too intense but nor are they boring.

Tuatara
Wellington brewers Tuatara have really taken off recently. Heck, their volume is large enough to justify custom-made bottles featuring an imprinted tuatara spine. But the scale of the operation has certainly not been at the expense of their brews – staples include the smooth Helles Lager and a very sessionable take on the New Zealand Pale Ale in their Aotearoa Pale Ale. These feature alongside some more experimental work, such as the monster eight per cent Tiramisu Barrel Aged Stout.

Their “Iti,” too, is an amazing big-hopped APA (American Pale Ale) that would hold its own well in the Hit the Hops category below. It slams you with huge flavour up front but without the drunkenness – at 3.3 per cent it’s arguably the most sessionable APA we’ve had.

Emerson's
How can you go past Dunedin’s favourite (and, by its age of 21, one of New Zealand’s earliest) true craft breweries? Critic recommends initially skipping on the usual Pilsner and going straight to the Festival specials. There’s a Salted Caramel Brown Ale and a Golden Bookie, alongside two other Brewer’s Reserves – Bald Eagle and The Rapture, both of which are heavy-hitting IPAs (India Pale Ales). Revert back to whichever of their standard brews you fancy after that – they’re all delicious and absolutely sessionable. Staples include Pilsner and 1812, which is an easy-drinking pale ale.

Funk Estate
Another brewery from New Zealand’s craft beer, and actual, capital, Funk Estate is relatively new on the scene but is certainly not lacking. The Parleyer Pilsner is a true staple, and the Sophisticuffs IPA is, as the team says, “funkalicious.” To be fair, the other beer that they’re bringing, Super Afro-disiac, isn’t exactly the sessionable type – coming in at a whopping 8.2 per cent – but it’s well worth mentioning. Released on 14 February every year, it combines such ingredients as honey, cacao, fig and chilli, and shouldn’t be missed. Likewise, we can’t wait to try their aptly named “Jam Grenade” when it arrives in Dunedin for the first time.

Critic's supreme pick of the breweries

Parrot Dog
We can’t emphasise enough how exceptional this team from Wellington is. They haven’t yet got the same name recognition as fellow Wellingtonians Garage Project and Tuatara, but their brews certainly propel them above and beyond. We recommend parking up and trying everything on tap. Yes, everything.

Start with the Bloody Dingo – a seven per cent Imperial Red IPA. Brewed with the explicit intention of “exploding taste buds,” this is a beer that perfectly exemplifies how flavour can dynamically evolve throughout the glass. Hard-hitting hops at the start are soon overridden by a full-bodied malt, before bouncing way back into the hop territory on the aftertaste. It’s no surprise this beer recently won the trophy for being best in its class at the 2014 Brewers Guild of New Zealand Awards.

In fact, if anything asserts Parrot Dog’s status as the premier beer at this festival, it’s these very awards – all eight of the beers the brewery is serving won a medal. That’s a hell of a haul. As hop heads our top recommendations are the Bitter Bitch IPA, the Bloodhound Red Ale, and the Pit Bull American Pale Ale.

Critic has a heavy bias towards the dankest hops – different hops have huge variation in flavour and seem to have found themselves as the focal point of New Zealand’s craft beer movement.

3 Boys IPA
This was the first IPA your humble reporter ever had, and it was mind-blowing. Returning to it as a heavier hophead doesn’t give you the giggles like it used to, but it’s a great gateway IPA and could very well do the same for other IPA virgins this weekend. It’s unique in its style for not being dominated by hops; rather it’s a dark, malty brew. You’ll find it at the Beer NZ stand.

Garage Project’s Garagista
Okay, we have to admit it – we haven’t actually tried this one yet. But going by Garage Project’s track record we’re more than comfortable recommending it. The brewery notes that it’s brewed and double dry-hopped with New Zealand, Australian and American hop varieties, so it should whack a powerful hop hit at the front of the mouth.

The reason for our confidence is that Garage Project produces a number of crown jewels of flavoursome hoppiness. “Death from Above” in particular (not featured, unfortunately) features hard-hitting citric American hops in combination with what can only be described as a Vietnamese mango and chilli salad-taste. And, indeed, these are the ingredients used. The beer’s imagery is even derived from the poster for Apocalypse Now – a swarm of Hueys approaching a field of hops on a dulling, hot sunset. And what do you know, its original name was going to be Hopocalypse Now. Nailed it.

Brew Dog Hardcore IPA
Here’s a token international appearance for you – a HUGE buzz-out of an IPA from Scotland. At 9.2 per cent, you should probably save it ‘til last, but still be sure to try it. Quite frankly, the brewery’s tasting notes describe it perfectly and it’s be a shame for us to re-hash them: “2,204 malted Maris Otter grains gave all they had to offer the world to provide the robustly delicate toffee malt canvas for the ensuing epic. Four hop cones willingly sacrificed themselves to ensure your mouth feels punished and puckering for more. 9,900,000,000 yeast cells frantically fermented their little hearts out as the sugars became alcohol in the depths of our fermentation tanks.”

Have some Kereru fun

This brewery falls under the Crafty Beers banner at the festival, but they’re bringing a great selection that serves as an exposé of the varied, experimental wonder they’re capable of. For Great Justice, a wood-fired coconut porter, has been described by some of us as akin to drinking a Bounty Bar. At 4.5 per cent you could drink it all day if you felt like it, and it’s popular among beer-lovers and haters alike. Their other out-there brew is the Kereru Karengose, a five per cent “gose,” which is a German wheat beer brewed with salted water and lactic acid. The Kereru twist comes in the form of Karengo, which is a pruple seaweed found in Kaikoura. This beer in particular, to be quite frank, we fucking love.

No, you’re not a wanker if you treat beer tasting as similar to that for wine. There are four steps in the correct tasting process: see; smell; sip; and swallow. Don’t be afraid to spend a prolonged period of time with each beer and really get to know it.

See – you want to tip the beer away from you and look through the comparatively thin layer near the rim of the glass. This gives all sorts of hints and can be treated as preparation for the flavour buzz you’re about to immerse yourself in. A key rule to remember here is that colour correlates to the type and amount of malt used, and opaqueness correlates to filtration and/or levels of wheat and hops.

Smell – Imitate your favourite wine snobs: swirl the glass before giving it a big nasal inhale. Remember that scents and flavours will often evolve at different points in the drinking process, so be sure to constantly check back in with your nose as you work through the glass.

Sip – Yup, here’s the good bit. It’s difficult to describe exactly what to do here but mouth swirls and inhaling over a mouthful are both good ways of picking up accents based on viscosity and play-offs between different flavours. You should also note how the flavour evolves over time.

Swallow – There is a lot more, taste-wise, to the swallowing act than you may be led to believe, and for that reason you should never, ever spit. For example, a hoppy IPA will often develop a completely different flavour as it disappears down your gullet.
This article first appeared in Issue 25, 2014.
Posted 2:58pm Sunday 28th September 2014 by Zane Pocock.