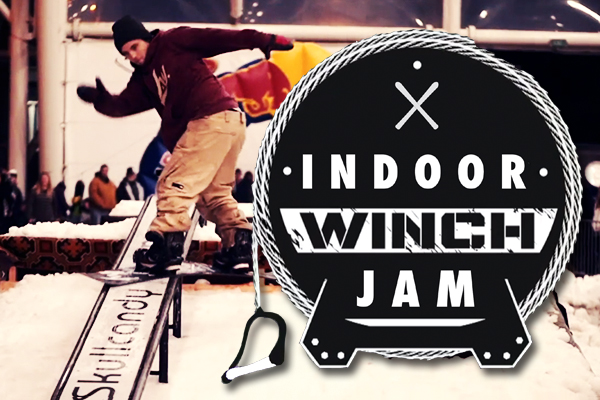 Dunedin students snow how to party

International and local snow bunnies show off in the stadium

Dunedin’s Forsyth Barr Stadium was the venue for the first Indoor Winch Jam held on Saturday 23 August. The event, which showcased snowboarding and skiing talent, involved snowboarders and skiers being towed by a winch on to a snow jump. The alcohol-free event had no charge for entry.

Two truckloads of snow were transported from Wanaka’s Snow Farm for the two-hour event, which turned Forsyth Barr Stadium into a temporary winter wonderland. The set up for the event included the snow being dumped onto wooden pallets in the eastern end of the stadium, with the athletes being towed by a wakeboarding winch and propelled up. Two steel rails then provided the athletes a platform to perform their best tricks. 30 skiers and snowboarders from New Zealand and the United States competed in the event. Two Red Bull guests, including professional snowboarder Jake Koai, judged athletes in the open jam format. Prizes were given for the most innovative tricks performed in front of the 300-strong crowd.

University of Otago marketing graduate and Red Bull student brand manager Cameron Sims was the organiser and manager of the event. He wanted to organise a student event that was “a bit out of the ordinary” for a Saturday night in Dunedin. “It was a student run-event, predominately for students,” Sims said. “Basically, I wanted to give them something constructive to do. You know, keep them from burning couches on Castle Street.”

Sims was delighted with the turnout at the first-time event. He was, however, anxious about whether the snow would melt during the four-hour journey from Snow Farm in Wanaka to Forsyth Barr Stadium in Dunedin. Sims said the event showed the creativity and knowledge of students within Dunedin, saying, “I think this was an event that has tried to show the rest of Dunedin and New Zealand that students have a brain, and we are doing cool stuff.” He was also happy the event attracted six American skiers and snowboarders as well as New Zealand athletes.

Sims hopes to see the event continue to grow in the future, “If all things go to plan and we plan far enough in advance, I’d like to see us close off Castle Street and have the event happen there next year.”
Posted 1:47pm Thursday 28th August 2014 by Steph Taylor.