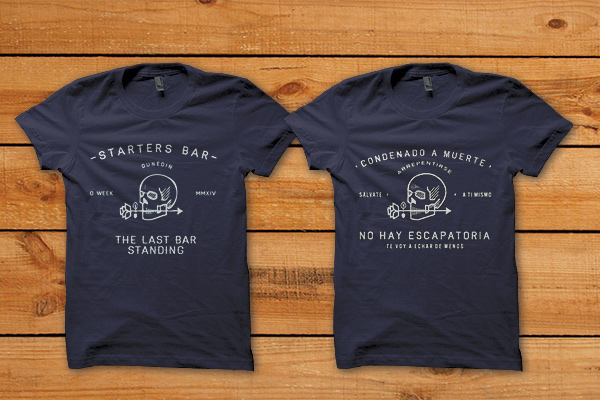 “We came across the design and changed it slightly”

Critic has discovered that the “original artwork” designed for the Starters Bar O-Week tee-shirts by local company Moodie Tuesday is actually the work of well-known American freelance artist Curtis Jinkins. The design, which portrays a Mexican-inspired skull motif and bears the words “Starters Bar” and “The Last Bar Standing,” was printed on hundreds of tee-shirts and singlets and sold at Starters during O-Week. The design is almost identical to Jinkins’, even down to the font and layout.

Moodie Tuesday is a Dunedin clothing company run by Jon Thom and Chris Brun. They sell shirts, art prints and dog wear, all bearing what they claim to be original designs. Moodie Tuesday was also commissioned to design this year’s limited edition Orientation Week tee-shirt, which was greeted unenthusiastically, as reported by Critic in issue one this year. Their philosophy is to “do the basics well,” as stated on their website.

“Growing up in rural Central Otago we had particular ideas and values instilled in us; to do things to the best of our abilities … the quality of our work speaks volumes about our character. We have taken these philosophies and made them the basis of the Moodie Tuesday label.” The Print Room, a screen-printing company also run by Thom and Brun, printed the apparel. The Print Room’s website states: “Our strength is in design, with a history in the fashion industry. This knowledge, mixed with your ideas, allows us to create designs that will be worn while meeting your marketing needs.”

Critic got in touch with Jinkins, a freelance artist based in Austin, Texas, who runs art company The Neighbourhood Studio. He created the skull design in November 2010 and was unaware of Moodie Tuesday’s plagiarism until we contacted him. “It’s disappointing to see artists like Jon Thom completely lift imagery from other working artists,” he said. “There is actually very little I can do when small companies assume my artwork.” Jinkins has been involved in copyright infringement before; he’s previously taken designers to court over stealing one of his designs, with the judge ruling in his favour and requiring the defendant to pay him compensation. However, Jinkins is unlikely to be hassling Moodie Tuesday over the plagiarism this time around. “My resolve has weakened over the years when it comes to tracking these individuals down … I don’t get any enjoyment out of sending guys like Jon an email telling him that I think he’s a hack.” However, Jinkins did note that “[Thom’s] version of the artwork is one of the more egregious as he has done very little (maybe nothing?) to alter the artwork from my original.”

At the time Critic went to print, The Print Room website still displayed the Starters tee-shirt design, with the description including the phrase “We had the privilege of designing the tee shirt shown to the side.” Critic managed to get in touch with Thom, who told us in no uncertain terms that he “came up with it.” “We just had an initial concept … the design was to be ‘the last bar standing,’ so it’s sort of a take-off of a gravestone.” When we brought up Jinkins’ almost identical work he backtracked, stating that “it might be similar to what someone else has done but, um … yeah. I don’t really know what to say, to be honest.”

After speaking with Thom, Critic contacted Starters Bar owner, Janice Turoa. The tee-shirts and singlets were sold at Starters throughout O-Week for $10 and included a free drink, which Critic notes is a great deal. At the time of print, the tee-shirts are still the uniform for Starters staff. Turoa described Thom and Brun as “really good guys” and was unaware of their plagiarism until we told her. She doubted that they intentionally copied the artwork, telling us, “I don’t think they would ever have done anything to hurt anyone else.

However, Moodie Tuesday co-founder Chris Brun told Critic a different story. “[Starters] didn’t really have a budget in terms of design, so to do an original artwork would’ve been far outside the budget,” he said. “We just came across this design and we changed it slightly and just ran with that … it was just a way for us to come up with a quick easy design that would suit the aesthetic of what [Starters] were going for.” When the issue of copyright was brought up, he claimed that they didn’t know it was copyrighted at the time, “otherwise we wouldn’t have used it.
“We didn’t set out to copy someone’s [copyrighted] work, it’s not something that we do.” Critic notes that it clearly is something they do, at least in this case, even if their intentions were wholesome.

Interestingly, Moodie Tuesday weren’t the first to use Jinkins’ skull emblem without his permission. Clothing brands Stussy and Deus Ex Machina, sunglasses brand Electric Sunglasses, a recording artist represented by the record label Sub Pop, UK band Ivy Lab, “and many more” have used the design, according to Jinkins. “Some companies (like Ivy Lab) own up to it when made aware of the infringement and settle up. Deus Ex Machina has actually become a great client of mine after discovering that the freelance designer they had hired had lifted the graphic, as is most common in the majority of these situations.”

Jinkins, however, continued to say, “For what it’s worth, Jon Thom using that image doesn’t take anything away from me, really. I would not have ever seen business from that establishment and had you not pointed it out, I never would have known of it.

“I don’t agree with his practices and he definitely deserves a slap on the wrist, but I don’t want to ruin his ability to provide for himself … in the local marketplace.
“I have a feeling that he’s probably a good kid who just used some lazy/sloppy judgment.”
This article first appeared in Issue 18, 2014.
Posted 9:43pm Sunday 3rd August 2014 by Nina Harrap.