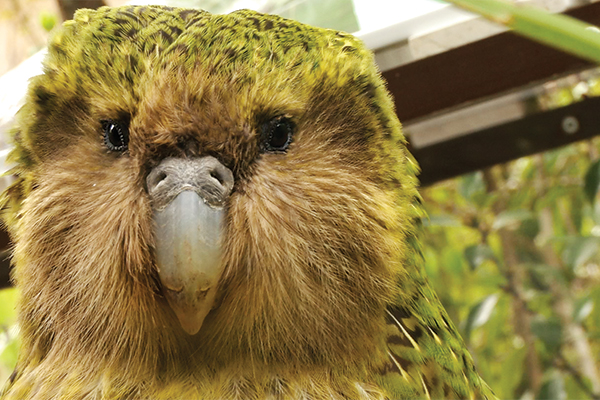 “Official Spokesbird for Conservation” will be famous

A documentary about New Zealand’s “Official Spokesbird for Conservation” has been selected as one of three finalists in the Newcomer section of WildScreen, one of the world’s most prestigious wildlife and environmental film festivals. The film, From Dud to Stud, was directed by Otago film graduate Ashwika Kapur and focuses on Sirocco the kakapo, the only bird in the world to hold an official government position. Kapur made the documentary as part of her Postgraduate Diploma in Natural History Film-Making and Communication at Otago’s Centre for Science Communication.

Sirocco, one of only 125 kakapo alive, was hand-raised after catching a respiratory illness as a chick. As a result, he seems to think he is a human and for several years he has taken part in conservation awareness efforts. In 2010, he was named New Zealand’s Official Spokesbird for Conservation. Critic spoke to Kapur, who described the kakapo as an “absolute character.” Her aim in directing nature documentaries is to “educate and entertain,” and in trying to strike that balance, she came across Sirocco. “I chose to tell his life story in the form of a rags-to-riches tale, through which audiences learn about this very unique species at large,” she says.

Understandably, it was never dull to work in close contact with such an unusual bird. Kapur describes Sirocco as looking like a cross between a parrot and a teddy bear. “To start with, I was perpetually fighting the urge to just abandon the camera and hug him!” she says. Filming took place in several locations, which meant Ash and Sirocco did a bit of travelling. She said, “Plane rides with a superstar bird are pretty odd! I got to carry him in his VIP box from Dunedin to Nelson. He got his own seat on the airplane, including a seat belt, and the captain made an official announcement that New Zealand’s Spokesbird was on board.”
Kapur is currently working as an Associate Producer for NHNZ’s new India series. Her From Dud to Stud success follows on from a long history of WildScreen finalists produced by the Centre for Science Communication. Students from the Centre have made the Newcomer category finals in four of the last five festivals, and one took the top award in 2006.

From Dud to Stud will premiere at the WildScreen festival, which will be held in Bristol, England and will run from 19–24 October.