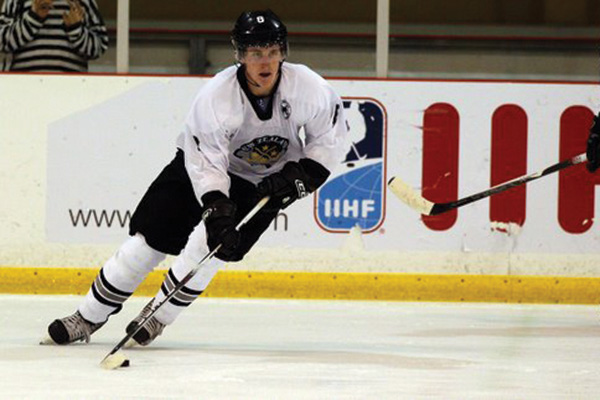 Talented Ice Hockey player Luke Pickering was among the eight talented students selected in the first round of Individual OUSA Grants this year. OUSA have awarded 45 Individual and Club Grants so far this year, and have completed two out of six rounds of grants.

Pickering used his $500 grant to travel to Jaca, Spain, to attend the Ice Hockey World Championships with New Zealand Men’s Ice Hockey Team, The Ice Blacks. Pickering was originally awarded the grant alongside friend and fellow teammate Connor Harrison, who was forced to decline due to a recurring back injury. Growing up in Queenstown, Pickering and Harrison became involved in the world of ice hockey at the age of five, competing in New Zealand age group teams from 16 onwards.

In 2012, Pickering moved to Dunedin and began playing for The Dunedin Thunder while Harrison remained in Queenstown. In a twist of fate, the boys found themselves pitted against each other in a match between the two cities. However, the boys were quick to unite, with Harrison joining Pickering in Dunedin to play for the Thunder, and with both being selected for The Ice Blacks. The two boys were incredibly thankful to the OUSA for their grant: “The OUSA were very [supportive] and more than happy to help out with grants for travel and other expenses involved with the trip. They were also supportive with me having to pull out of the team,” stated Harrison.

Other OUSA Grant winners include powerlifter Sarah Simpson, who attended the 2014 International Powerlifting Championships in South Africa, and Dental students Stephanie Lee, Lucy Molony, and Kate McElroy, who travelled to the Cook Islands to take part in the University of Otago Dental Care Project.

Critic spoke to OUSA Clubs Development Officer George McLenaghen, who has thoroughly enjoyed being an integral part of the grant process. “Meeting the people who apply for grants has been a highlight of this job for me,” said McLenaghen. “It’s a pretty humbling experience to meet these talented, committed, passionate people.” In the future, McLenaghen expressed interest in moving the Grant application process online, making access easier to talented students, and increasing time spent face-to-face in an interview setting with suitable students.

For students considering applying, Pickering has some solid advice: “Definitely apply. OUSA were more than happy to help us out and it turned out to be a massive help in getting [overseas].”
This article first appeared in Issue 13, 2014.
Posted 2:07pm Sunday 25th May 2014 by Emily Draper.