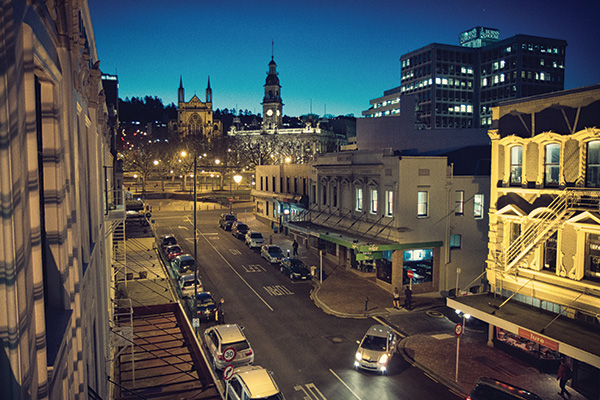 Two Otago post-graduate students are working to transform the lower Octagon into a pedestrian precinct with their submission to the DCC’s Annual Plan gaining momentum and support from councillors. Georgina Hampton, a PhD student in Genetics, and Alexis Belton, an honours student in Geology, presented their 36-page proposal to the DCC at the 2014-2015 annual plan meeting on 16 May, and said that the response from both the council and the community was “really awesome.”

The submission suggests trialling the lower half of the Octagon and the first block of lower Stuart Street as a pedestrian-only area. The idea of the lower Octagon as a “vibrant, active and people-focussed area” was well received by councillors, with Cr Aaron Hawkins the first to suggest that the council investigate a trial of a pedestrian precinct, reported the ODT. He was supported by many of his fellow councillors, including Cr David Benson-Pope, who said that the proposal was “very good” and “timely” in terms of considering the future of urban Dunedin. Council chief executive Dr Sue Bidrose agreed with Benson-Pope on the good timing of the submission, as council staff were already considering ways of rejuvenating other parts of the central city, potentially including the introduction of pedestrian zones. A trial zone in the Octagon and lower Stuart Street could be part of that work, she said.

Hampton and Belton met in 2012 at Powershift, a climate summit organised by Generation Zero, where they both attended a transport workshop. They feel that a pedestrian precinct for Dunedin is long overdue, pointing out in their report that “Dunedin is currently the only major centre in New Zealand without any pedestrian precincts.” Hampton said, “Wellington’s got Cuba Street, Auckland’s got a whole list. Even smaller cities have pedestrian precincts and have started to think more about changing the historic prioritisation of the motor vehicle.”

While the submission undoubtedly received support from many councillors, others were less enthusiastic, according to reports by the ODT. Deputy Mayor Chris Staynes pointed out that a trial pedestrian precinct in the Octagon could interfere with other work that’s already been planned for George Street. Other councillors disagreed with him, backing Cr Hawkins’ resolution in favour of a feasibility study. Cr Richard Thomson said that the Council needed to start small – running a trial anywhere on George Street would involve “extremely significant” changes, whereas he viewed the proposed trial a simpler way to “socialise” the idea of pedestrian precincts.

Cr Hawkins finished off the argument by reminding councillors of the vibrant atmosphere Dunedin had experienced from pedestrian-only zones created while hosting Rugby World Cup matches in 2011. “How cosmopolitan and worldly we all felt for two weeks … I firmly believe the amenity values will be profound.” Ultimately, the Council passed two motions in light of Hampton and Belton’s proposal: the first, to request a feasibility study into the possibility of trialling the proposed pedestrian precinct; and the second, to request research into the possibility of crowd funding of the trial by interested parties.

Not only did Hampton and Belton’s success receive front-page attention in the ODT on 17 May, but widespread support from the community has been flowing in also. ODT commenter “Overit” stated that, “Slowly but surely we will finally get a town centre that many of us have called for many years. Well done!” Fellow commenter, “Fietser” said, “Best proposal for Dunedin in years! And initiated by two students with vision, way to go!“ Other ODT commenters suggested going even further, calling for parts of George Street to be pedestrianised and for Moray Place to be made into an enormous roundabout.