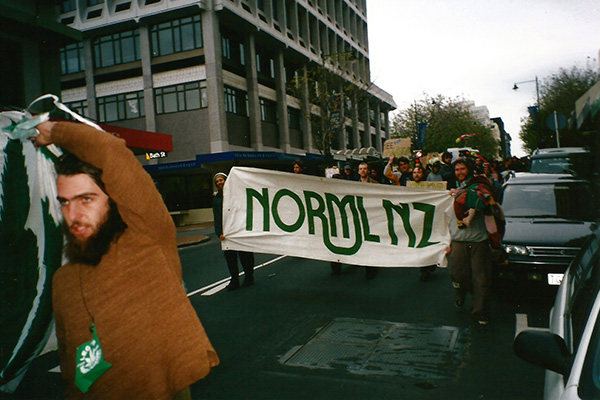 The history of Otago NORML

National Organisation for the Reform of Marijuana Laws

The University has seen proponents of the cannabis law reformation traverse its campus for years, but none as lasting as the Otago University branch of the National Organisation for the Reform of Marijuana Laws, otherwise known as NORML. Otago students have been gathering as early as the 1970s in support of the legalisation of cannabis – a time when now-Invercargill mayor Tim Shadbolt spoke on campus in favour of cannabis legalisation and when future-professor Sally Caswell investigated the effects of cannabis intoxication on volunteers from Otago NORML.

Critic spoke with current leader of Otago NORML, Abe Gray, who has been involved with the group for the past 10 years after humbly beginning as an observer and participant in the 420 protests. Gray is also the deputy leader of the Aotearoa Legalise Cannabis Party (ALCP), and co-founded New Zealand’s first cannabis museum with leader of the ALCP Julian Crawford. Gray had many tales to tell of the highs and lows the group has faced over the years.

In Gray’s view, the reason the groups have always, and will always, exist is based on the idea that political parties are not listening to the views of the people. Frustration has been boiling for years over the fact that “decades of evidence show that drug prohibition isn’t working.” In order to get this message across, the Otago NORML group protest at 4:20pm each Monday, Wednesday, and Friday on the lawn of the Student Union. The protests aim to use people power and civil disobedience to get their message across. Gray calls it “a reverse hunger strike, because we all know that’s not going to happen after a session.”

What is now a weekly occurrence began as nothing more than a yearly gathering in the Octagon for the internationally recognised “J-Day.” In 2003, around 50 members of NORML attended J-Day and hot-boxed the Dunedin Police Station in protest; marijuana seeds were also planted in gardens at the front of the building. The following year the same act was repeated, however, this time there were 100 participants.

In 2004, in a spur of the moment act, Danny, a member of the group at the time, placed posters around the University advertising that on a Friday the group would be protesting at St David’s. Tactically set underneath the University’s only camera at the time, the protest was seen as a success by NORML members and the 420 gatherings became a weekly event on campus. 2006 saw OUSA pass motions at a Student General Meeting “… that OUSA declares the University campus a ‘Prohibition Free Zone’ where prohibition of cannabis shall not apply,” and “that OUSA condones the public smoking of cannabis on University grounds as a protest against cannabis prohibition.”

Friday remained the only day of protest for the following three years until 2007 when the newly introduced Campus Watch attempted to have the group shut down entirely. A confrontation between Gray and a member of Campus Watch was published in Critic and later made the front page of the Otago Daily Times. On 27 July that year, current affairs program Close Up caught hold of the story, attended a Friday protest, and interviewed students who also were members of NORML. Both Campus Watch and the University refused to comment on the confrontation and, in retaliation, NORML announced that 420 protests would be held on a Wednesday also.

2008 was a particularly contentious year for NORML, beginning with the first annual Cannabis Awareness week from 25 April to 3 May. As part of the week’s events, the group hosted a rather heated round table discussion on “Alcohol and Cannabis: Is Prohibition Rational?” Held in a University lecture theatre, the discussion was based on “the relative evidence of harms from alcohol and cannabis use, whether or not current policies are working to reduce harm, and the place of harm minimisation in government policy toward alcohol and other drugs.” Speakers included NZ Drug Foundation Director Ross Bell, WellTrust founder & former National/United MP Pauline Gardiner, President of NORML NZ Chris Fowler, Green Party MP Nandor Tanczos, Otago Criminal Law Professor Kevin Dawkins and Progressive MP & Associate Minister of Health at the time Jim Anderton.

A month after the debate, controversy arose after a University student was arrested for smoking cannabis on campus. In retaliation around 500 students marched from the OUSA office to the Proctor’s Office in what is still the largest protest to occur on University grounds. After the protest had finished, a breakaway group of “hardout 420s” also hot-boxed the Proctor’s office. The following week, a smaller protest gathered at the front of the Clock Tower Building. The only counter-protest involved three members of a University Christian group.

In July the same year at the annual Market Day, three members of NORML were arrested and taken into custody by Dunedin Police. Officers approached the group with a request to search Gray after “a complaint from the members of the public.” It was later discovered that two mufti Police officers had seen the group smoking marijuana earlier that day, and Gray was later seen putting a pipe into his pocket. After a minor disagreement, Police attempted to constrain him resulting in massive uproar from fellow group members. Footage of the arrests was posted on NORML’s YouTube channel and show one member, identified by the ODT as an 18-year-old student, being taken into custody after sitting down in protest in front of the Police car. Another 24-year-old student was also arrested after attempting to free Gray from officers.

The fact that mufti officers had been in the vicinity of weekly 420 protests caused great friction between local Police and NORML. In what was known as the Narkiology campaign, posters titled “Narkiology 101” and “How to spot a nark in your class” were uploaded to the NORML website and hard copies were also placed around campus. Images and identification numbers of the police were involved in the campaign, which made headlines all over the nation. Beer company Tui responded by publishing a “Yeah Right” billboard that read, “I’m taking Narkiology 101.”

The group remained out of the limelight until the latter part of 2013 when Vice Chancellor Professor Harlene Hayne announced the future implementation of a smoking ban on all University property. Gray told Critic earlier this year that the University sounded “like they were bluffing,” and that they are “basically intimidating everyone into believing they can enforce the ban.” The group claimed that if the ban was to be enforced, protests would still take place and alternative methods, such as vaporisers, would be used. In retaliation a third day, Monday, was added to the weekly protests. True to their word, the ban was implemented at the start of 2014 with NORML responding by using vaporisers at their protests. However, the year has been eventful with on going scepticism by NORML regarding the legality of the ban, as well as a recent confrontation with Campus Watch and Police in their enforcement of the ban.

September 2013 saw the grand opening of the Cannabis Museum, which is fitted with a window display of two manikins smoking “spots.” Situated at 66 David Street, the museum has a research library of over 100 books, as well as archive material on 420 dating back to the 1970s. Already the museum has seen a variety of visitors, from local University students and NORML members to individuals from all parts of the world. Critic spoke to two Spanish tourists, Amaia and Oirer, who decided to visit Dunedin purely for the local cannabis culture. During their stay the pair planned to “meet people and protest for legalisation,” also attending the 420 protest the following Wednesday.

The museum is currently funded entirely through the donations of students, visitors and various members of the public, many of whom wish to remain anonymous. Recent merchandise has also become part of the fundraising efforts, the most popular being tee shirts featuring modified versions of the University’s crest. The tee shirts are complete with Marijuana leaves, the Zig-Zag logo and the slogan “Cannabis Maximus.” They are sold as one of the many methods to simply “keep the lights on.”

This year will also see Gray and Crawford stand in their first election for the Aotearoa Legalise Cannabis Party on 20 September. The party, formed in 1996, pushes for the legalisation of marijuana for medicinal, recreational and industrial use in New Zealand. In their own words, “a single policy that touches on every issue.” In the previous election, under different leadership, the party received only half a per cent in nationwide votes. This year, the two aim to make “at least a whole per cent, maybe even five per cent,” in numbers.

Later this year Gray is visiting Denver, USA, where he hopes to organise marijuana tours in the near future. With the first recreational marijuana store officially being opened on 1 January this year, Denver has recently legalised marijuana for both medicinal and recreational use. Gray plans to create package deals for those who want to experience the marijuana culture in the region, “much like deals they offer on cruise ships and stuff.” Tours are also planned for Dunedin itself; landmarks are said to include famous smoke spots and the Scarfies house, with visitors being dropped at a 420 protest upon the tour’s completion.
This article first appeared in Issue 11, 2014.
Posted 3:11pm Sunday 11th May 2014 by Laura Munro.