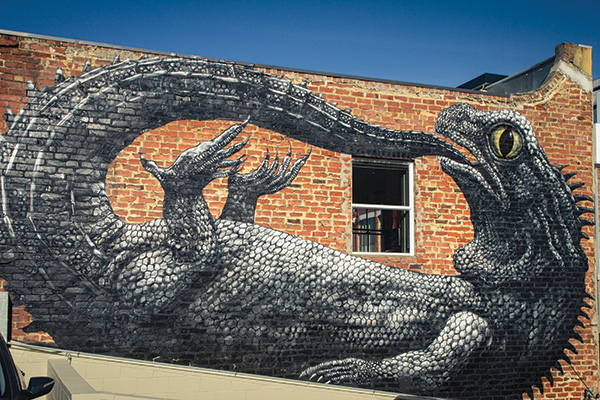 Dunedin is quickly becoming a concrete canvas for internationally renowned street artists. Globe-trotting English street artist Phlegm is one of the latest to embrace Dunedin streets as a canvas for his unique brand of “visually stunning, playful and transformative” art, according to DCC Community Arts Advisor Cara Paterson.

Phlegm’s two works, in Vogel Street and Moray Place, are inspired by magical imagery. The Moray Place mural features an amorphous bird-insect figure, while the recently completed Vogel Street work features a large monster-fish swallowing a number of small boats. Speaking to the ODT, Phlegm said, “It’s great here for street art. You’ve got so many big industrial old buildings here. I grew up painting on buildings like this in Sheffield.”

Friend and fellow street artist ROA, the Belgian artist responsible for the large monochromatic tuatara on Bath Street, inspired Phlegm’s Dunedin visit. Paterson says, “I think both [Phlegm and ROA] bring their own creative skill set … and we are lucky to have had them in Dunedin. I watched ROA’s artwork being created and witnessed a huge number of people captivated by the process and skill of painting in that scale. I think the artworks add interest and an energy that is inspiring and questioning.”

Paterson shared the sentiment of many by embracing a street art movement in Dunedin as a way to inspire local artists to bring their work into a more publically visible arena. “We have an opportunity, I think, in our urban environment to celebrate the magic spaces we have in the city, the buildings and surfaces that people look at everyday can be transformed and re-imagined.”

While some have voiced concerns about the potential harm to Dunedin’s heritage buildings, the DCC’s Heritage Planner does not believe the street art will cause any damage. “We need to make sure the location is right and it won’t cause damage or other unnecessary problems/conflicts. [However,] if the works are attracting people to an area to see them, involving people in their city, and improving the way the city looks, then I see this as positive.”

As for a return visit to our city, Phlegm said to the ODT, “I’d love to come back to Dunedin. A couple of other buildings have caught my eye.”