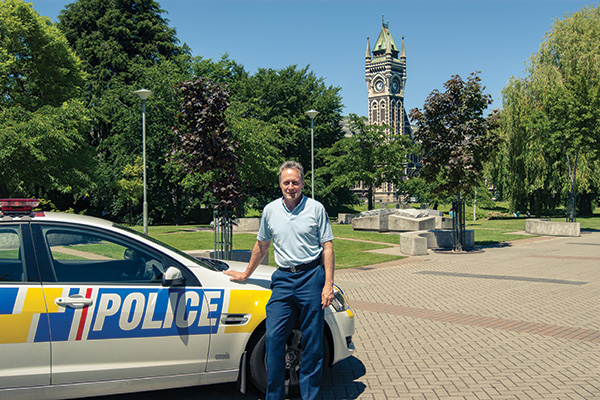 Holt cops a new position as deputy warden at Toroa

Despite Critic’s prying attempts to unveil the usual ridiculous student antics, the Proctor had little to share and reasoned that “everybody’s got their heads down and their bums up with exams coming up.” However, the Proctor said he was sad to see that Campus Cop Max Holt is leaving his post to become Deputy Head at Toroa College. “He is a real worker, he is great. I hope they replace him with somebody of an equal calibre, and soon.”

Graduating from Otago with a Bachelor of Commerce, Holt has been a fully sworn police officer since 1991 and started his role as Campus Cop at the beginning of April 2006. Otago is one of only two educational facilities in New Zealand to have their own police officer, with the other being Massey University in Palmerston North. Based in North Dunedin, Holt not only works closely with the Proctor and Campus Watch, but also has a variety of other responsibilities. These include offering advice on safety and security, as well as taking complaints including thefts and lost property. As with the New Zealand Police at large, Holt said his role is largely focused on prevention and, as a result, the North Dunedin area has experienced a dramatic decrease in crime in the past three years. Holt was particularly proud of the joint efforts of Police and Campus Watch in targeting the reduction of burglaries in the North Dunedin area.

While Holt acknowledged the vast majority of students are well behaved, he said it was disappointing to see that Dunedin’s reputation is tainted “by small groups of largely male flats” who don’t seem to get the point. “There are plenty of students around who are at the library studying on a Friday and Saturday night.” However, he said that over his time as Campus Cop he has noticed a change in students. “I really think the Canterbury earthquakes changed the student psych [in regards to] their responsibility to each other.” He added that initiatives like the Volunteer Student Army encouraged this and helped to create a better sense of awareness and support among students and the wider community. “I hope students can see how significant their part is for the community. Students have changed, and I think students are now more responsible for achieving academically.”