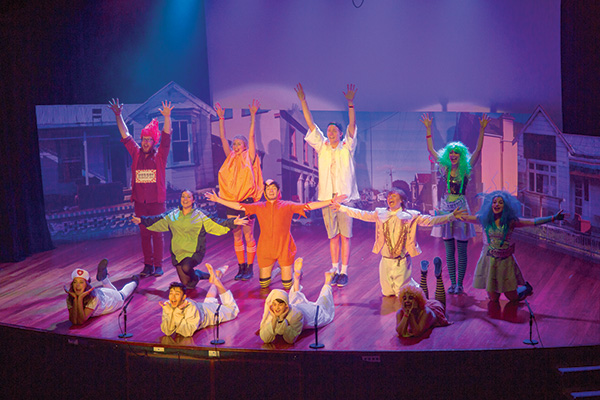 "Everyone knows the videos are the best bit"

The first two opening nights were attended by two very different audiences, according to Macdonald. Opening night saw the majority of tickets given away to Hyde Street residents, while the second night saw tickets given to friends and family of the cast. Macdonald said “on the second night, [the audience] picked up on the more intellectual jokes.”

The main storyline of the show concerns a young Scrooge who is missing out on the fun of the Hyde Street keg party because he is too dedicated to his studies. The majority of the main sketch is occasionally awkward but as the cast said themselves, “What’s the point in having a main story line in the Capping Show? Everyone knows the videos are the best bit.”

The show received countless laughs from the audience with the cast ridiculing several well-known brands, including a Dove parody that ingeniously interpreted their real beauty advertisements as a racist slur meaning “real beauty is white.” Other live and recorded sketches included mockeries of Kim Dotcom, Malaysia Airlines and a violent skit involving the Teletubbies.

The Capping Show did not offend to its usual standard, despite attempts to offend men, women, children, Campus Watch, the Proctor, several celebrities, the blind, the paralysed and, of course, Unicol. Either the jokes were played a little too safely or Critic is difficult to offend. Both are plausible.

The usual live band did not feature in this year’s show, however, OUSA Communications Coordinator and resident MC of the Capping Show Alasdair Johnston, did a fabulous job of keeping the audience entertained during the break. He even managed to insult the Indians of the audience, which the show had missed out. “We have a stall outside run by the Indians. No stereotypes, please; it’s not a dairy, although it does sell lollies, chips and cans of drinks.”

The Selwyn Ballet perform at the Capping Show every year and Critic believes this year was one of their best yet, with original moves and skirts far too short for these talented ballerinas. The Sextet and Sexytet groups gave their usual renditions of popular tunes replaced with explicit lyrics. Critic would have to give the girls the winning trophy for their performances, which included some epic beatboxing and covered difficult flatmates, threesomes, Tinder and bisexuality. “Time for me to explore, that’s what uni is for, doesn’t make me a whore,” sang the sexytet.

The Capping Show starts at 7.30pm at the College of Education Auditorium every night this week until 17 May 2014. Tickets are $14 each (plus a booking fee) for students from dashtickets.co.nz.
This article first appeared in Issue 11, 2014.
Posted 3:11pm Sunday 11th May 2014 by Josie Cochrane.